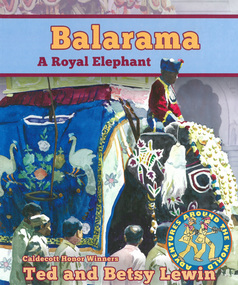 On a tour of southern India, the authors are so entranced by Drona, the lead Royal Elephant of the maharaja of Mysore, and the stories his mahout (trainer) tells that the celebrated children’s-book duo decides to return to southern India for the Dasara festival in order to see Drona lead an annual ceremonial procession. . . . Illustration styles are mixed here, from Ted Lewin’s rich, layered watercolors to Betsy Lewin’s funny, sketchy vignettes. The artists’ return is bittersweet: Drona has met with an untimely end but will be replaced by Balarama, another magnificent elephant that will bear the weight of the ceremonial howdah for the first time. An extended snapshot of the animal, its care and importance to the people of India, the book provides a pleasing mixture of the authors’ observations, descriptions of local traditions and a stately depiction of the great beast, all holding together nicely in a flowing narrative.