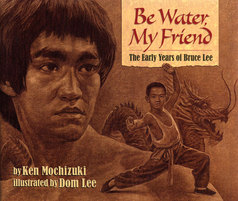 Be Water, My Friend

Growing up in Hong Kong in the 1940s and 1950s, young Bruce Lee had an active mind, boundless energy and a knack for finding trouble. As he grew older, Bruce also developed an interest in martial arts. He thrived on the grueling training but struggled to understand and apply the principles of gentleness and yielding that the master taught. Only after he set sail for the United States at the age of eighteen did Bruce truly embrace the values of martial arts and discover his own path to inner calm. Bruce Lee eventually became a pioneer of martial arts cinema, and his legacy lives on in popular culture. Here, author Ken Mochizuki talks about how the idea for the book came about, and the process involved with writing a good nonfiction story. 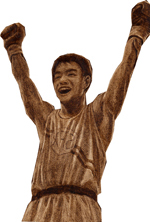 Why is a book about Bruce Lee's early life important?
Most people know Bruce Lee only from his films, as a superhuman fighting machine. But there was much more to Bruce Lee than that. During his early years he became a voracious reader—a trait that carried over into his adult years. He had poor eyesight from the time he was a young boy; and he was short and skinny. He enjoyed ballroom dancing. So how did this restless, troublesome "nerd" become a martial arts legend? By physically and mentally discplining himself, and by learning the philosophical foundations of martial arts—that it is not all about fighting.

In the past you've written other nonfiction titles which recount people and events in history. What are some of the challenges in trying to tell a nonfiction story?
The first challege is finding all the facts and sticking to them. It's not like writing fiction, where the author can steer the story anywhere he or she wants to. The second challenge is turning all those facts into a story, with the elements of a fiction story—beginning, middle, end, character development, and conflict—while still adhering to the facts.

What kind of research did you conduct for this book?
I started off by viewing an exhibit on Bruce Lee's life, based on a collector's collection of Bruce Lee memorabilia in Seattle. I obtained most of my information from biographies and videos about Bruce Lee, including a TV interview (in which Lee said "be water, my friend,"). I also have a friend who studied wing chun, the martial art Bruce Lee learned as a boy. My friend trained under a student of a student of Yip Man, Bruce Lee's master, so I knew this technical advice was authentic. Information on Bruce Lee's early years is scarce, but lucky for us he was a prolific writer and often wrote about those years.

In the course of your research, did you learn anything about Bruce Lee that surprised you?
When I first contemplated writing a biography of Bruce Lee, I wasn't sure why I should. But when I toured the exhibit in Seattle and saw how he was a child actor in the 1950s, how he had his own personal library of 2,500 books as an adult, and how he developed and followed his own personal philosophies, these were revelations. When I saw a photo of Bruce Lee sitting on the floor reading a book in front of the shelves of his library, I knew I wanted to do this book. Readers needed to know this side of Bruce Lee!

What is your favorite part of this story?
One favorite part is when Bruce Lee has his epiphany with the concept of being like water. Lee once said something else about water that didn't make it into the book: "You pour water into a container, and it assumes the shape of that container." My other favorite section is "The Rest of Bruce Lee's Story." In the past, I have considered writing books about what martial arts really is (the art of fighting without fighting), how interracial marriages were still illegal in some parts of the United States until 1967, and how actors of Asian descent were treated in Hollywood. Interestingly, all those subjects are covered in the life story of Bruce Lee.

What do you hope readers will take away from this book?
I hope readers, especially guys, will think about this: if you call your peer who wears glasses a nerd, if you think reading is boring or a waste of time, if you think ballroom dancing is for sissies, if you think you don't have to take school seriously and won't live to regret it— remember Bruce Lee, often considered the man of men, the most macho of men, was and did all of these things and much, much more.

Ken Mochizuki lives with his wife in Seattle, Washington.