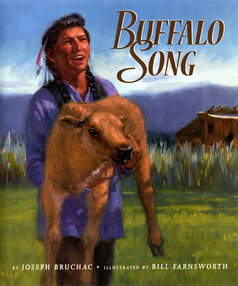 In Buffalo Song, Joseph Bruchac tells the story of the first efforts to save the buffalo, an animal sacred to Native Americans and a powerful symbol of the American West. Here, he talks about writing and learning from history.

What do you enjoy most about writing?

I actually enjoy every aspect of the writing process, each of which has its own rewards. When I'm doing the research for a new project, it's like being on a journey (and sometimes I find myself actually taking trips–such as the one I made to Montana to the places where this story happened) and I'm always being surprised by things that happen which are unexpected. The actual writing itself is probably the part I like the most because when I start telling a story there's always a time when the story begins to tell itself, when it seems as if I am taking dictation and I almost cannot write fast enough to keep up with what happens next. Strangely, though, I also really love the process of revision. Having a good editor read your work with care and concern and then being able to respond to that person's suggestions, all with the intention of making the book better–that is just so cool!

What do you relate to most in Buffalo Song?

I guess that I'd have to say that the main human character, Walking Coyote is the person I felt closest to in the story. His concern for the buffalo, even to the point where he ended up virtually penniless taking care of that small herd, is an inspiration to me. He was not a perfect character (none of us are), but there's something deeply moving about the way he is such an important part of saving this great animal from extinction and doing so within a cultural context that is truly American Indian.

Then again, I also like that little buffalo calf who grows up to lead her herd.

You’ve written many books, both fiction and nonfiction, but Buffalo Song seems to straddle the border more than most. How did you accomplish that? How is writing nonfiction different than writing fiction?

Buffalo Song is a sort of hybrid of fiction and nonfiction in that it is a story that exists within a well-researched historical framework, telling the story of real events and real people (without changing them), but adding details within that framework–such as conversations between characters or imagining the thoughts or motivations of the principal actors.

The most important difference for me between fiction and nonfiction is that you have that framework (of actual events and real people) in nonfiction. In fiction, you create your own framework and you can change any part of it at any time to serve the purpose, the needs of the story.

In your acknowledgements, you say that you worked on this book for twelve years. Where did the idea initially come from, what took you so long, and how did you know when it was finally done?

I'm not sure, now that I think of it, which of the trips I made to Montana was the one that got me first thinking about the story. I've made several over the years and heard the story more than once. I also was inspired along the way by a painting I saw of Walking Coyote on his journey with the buffalo calves. (I later discovered that painting had a couple of historical inaccuracies–which do not appear in my book.) I wrote an early version of the story back then, then wrote a fuller telling for a previous editor of mine with another publisher. That version never ended up being published–and that was fortunate. For I found several further sources for the story (mentioned in my acknowledgments) and went on to do a complete rewrite, telling the story in a whole new way. That later version was the one I sent to LEE & LOW. Of course, this was not the only book I was working on for all those years. In point of fact, I completed a number of other books over that period.

What do you think of Bill Farnsworth's illustrations? Was his depiction of life in the 1870s and the Salish way of life authentic?

I worked with Bill while he was doing his paintings,. He sent me early drafts and I responded to them with various suggestions that dealt with clothing, life style, issues of cultural authenticity. I enjoyed working with him very much and I believe that he did an excellent job of depicting the story with great artistry and great authenticity.

What do you hope readers take away from Buffalo Song?

One thing I hope people will realize is how big a difference one determined person can make. If you never try, you'll never know what you are capable of accomplishing.