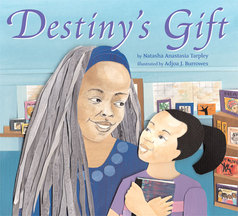 "People always ask me how I became a writer," says Tarpley. "I wish that I had some crazy, magical story to tell them about how I inherited Shakespeare's quill or my great-great-great-great grandmother's diary, and how these carefully preserved artifacts transported me to a mystical realm where stories hang on trees like sweet ripe fruit, and all I had to do to receive my writing powers was eat my fill. But the plain truth of the matter is, I simply fell in love with words." In October 2004, LEE & LOW BOOKS published Destiny's Gift, Tarpley's fourth picture book. Destiny's Gift is the story of a young African American girl who loves books, and tries to help a friend's neighborhood bookstore from going out of business.

Destiny's story evolved from Tarpley's childhood experiences, including visiting local bookstores. "As a kid, walking through the doors of my favorite neighborhood bookstore, I felt as though I was entering a place that was somehow separate from the noise and busyness of everyday life." says Tarpley. "The owners always remembered me. I don't know if they ever knew my name, but they could recall the last book I'd purchased from them and usually asked me what I thought about it. Then they'd steer me down crowded aisles, excitedly pulling books off the

shelves for me to look at as we went along. They must have read every book in the store, because they talked about each one like an old friend." Tarpley went on to say that independent bookstores were important to her not only as a child, but also as an adult and a writer. "As a writer too, small bookstores have become great friends, promoting my work when others wouldn't.

Destiny's Gift is not only a touching story of friendship, it sends some important messages to readers. "I would like to stress that a child's creative talents, whether they be in writing, music, science, collecting, etc., are valuable and that they can be used to make a difference in someone else's life in addition to their own," says Tarpley. "This story encourages kids to acknowledge and celebrate all of their talents and gifts, as well as their own capacity to make a difference in their community."

Tarpley has published several books for children, including Bippity Bop Barbershop, which received a starred review from Booklist. She has also written and edited several books for adults. Her honors and citations include Island Institute Writer in Residence Fellowship in Sitka, Alaska, Zurich James Joyce Foundation Research Fellowship in Columbus, Ohio, and the Washington DC, Commission for the Arts Larry Neal Award for poetry. She lives in Chicago, Illinois, with her two cats, Manhattan and Summer.