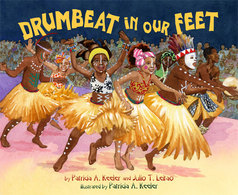 Drumbeat in Our Feet

“There’s an old African saying, ‘If you can walk, you can dance. If you can talk, you can sing.’ Music, song, and dance are vital parts of daily life in Africa, and have been for as far back as anyone can remember.” So begins Drumbeat in Our Feet, a journey into the deep-rooted traditions, artistry, and energetic spirit that make up the world of African dance, past and present. Below, authors Patricia A. Keeler (who is also the illustrator) and Júlio T. Leitão talk about the history, tradition and celebration of African dance. 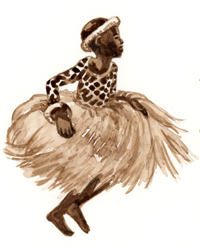 Leitão, a native of Luena, Angola, has always loved African dance. “I’ve been teaching African dance to children for sixteen years,” he says. “I got started when the children were watching me teach classes to adults at the National Black Theater on 125th Street in Harlem. They were so curious and excited to learn.” Leitão began meeting the children at a playground and teaching them various dances. A few weeks later they found themselves performing during Staff Day at the United Nations representing his home country, Angola. The dance group Batoto Yetu (which means “our children” in Swahili) was born.

Soon after, Keeler’s love of African dance started after seeing the Batoto Yetu dance troupe perform at the Victory Theater in Manhattan. “In the darkened theater, dancers yelled ‘Mayi, wetu, mayi!’ and African drums rumbled and thundered,” Keeler remembers. “Stage lights came on as kids in grass skirts danced, stamped, and leaped down the aisles. Ominous puppets swept across the stage. The performance built to a celebration of African indomitability. But they had me the minute they called ‘Mayi.’”

Leitão teaches the children of Batoto Yetu traditional dances of the Luba and other people from Angola and the Democratic Republic of the Congo. “The most important tradition carried on by our dancers is respect and awareness for the rich history of Africa, particularly that of the Kingdom of the Congo,” says the co-author. “The dances bring attention to pre-colonial Africa, its leadership and cultural innovation.” Keeler echoes this sentiment as one of the reasons she wanted to create a book about African dance. “Traditional African dance is one of the earliest forms of dance, having been developed more than two thousand years ago,” she says. “You see elements of traditional African dance in all modern dance styles. Modern dance is also similar to African dance, because you dance what you feel. The dancers are the animals and the elements wind, water, and fire. In hip-hop you see the fast, powerful rhythms and forceful steps of African dance. In ballet you see the synchronized footwork, graceful spinning, and soaring leaps of African dance.” Leitão adds another reason for writing a book about African dance. “Growing up in colonial Africa, we were told that one day we would have to write our own books to tell our story. I am the first generation to live after colonization, and I want to tell the story just as it is.”

Drumbeat in Our Feet tells two stories side by side. Copy set off on the left side of each spread focuses on the history of dance in Africa; the types of dances, their meanings, and traditions; or the costumes, instruments and props used in the dances. The rest of the spread shows the Batoto Yetu dancers dressing, dancing, singing or playing music in modern-day venues. While much of the book’s content was second nature to Leitão, the authors also conducted some research to make sure they painted an accurate picture of African dance. “I basically became a detective,” Keeler says, laughing. “I followed the Batoto Yetu dancers to practices and on stage. I even followed them into their dressing rooms. Of course I asked their permission first, but then I tried to be inconspicuous so the kids would act and speak naturally.” Keeler notes that one of the biggest challenges of developing and writing Drumbeat in Our Feet was making the connections between the Harlem-based Batoto Yetu dancers and the traditional dancers in Africa. “Some connections came easily in both the writing and the art,” the co-author says. “For example, it was easy to show how the white dots painted on the children’s legs and arms represented the dancers who had come before them. This paralells the white dots painted on the carved wooden figures in Africa to represent their ancestors. Other connections were more difficult to show. In Africa, it is common for everyone to join the dancing around a campfire, but in the United States, dancers may dance into the aisles to try and include the audience. That is a lot to show on one spread!” Leitão’s research took him as far as Portugal, where they have texts that are hundreds of years old. “I am also very connected to historians and scholars of my own country, Angola, who pass on a lot of knowledge about my people through oral tradition,” he says.

Both Keeler and Leitão hope this book will inspire readers to learn more about the continent where these ancient dances and traditions originate. “I hope they will be motivated to learn more about Africa, want to travel there, and learn more about our culture and history,” Leitão says. Keeler, too, hopes that young readers will find themselves enriched by what they learn about Africa and its traditions. “I want children to know Africa as an artistically wealthy continent, overflowing with dances, songs, and musical instruments. From the art in Drumbeat, they may also increase their awareness of the beauty and variety of African printed fabrics, costumes, and carved statues. Traditional African dance is an ancient treasure, and children should know the joy of singing African songs and performing African dances.”

Leitão lives in New York City with his wife and daughter. Keeler lives with her husband in Hoboken, New Jersey.