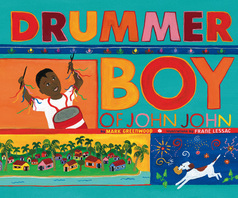 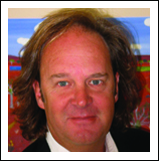 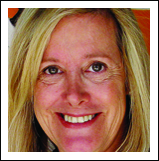 Young Winston is on the quest to win the Roti King’s prized roti. There’s just one small problem – he’s not in a band! Inspired by the life of Winston “Spree” Simon, Drummer Boy of John John is the tale of musical discovery and creativity. With a bit of imagination and the help of his friends, Winston takes on the Carnival bands, drumming his way to victory. In this BookTalk, Mark Greenwood and Frané Lessac, husband and wife team behind Drummer Boy of John John, tell us what fascinates them about the Caribbean and what they hoped to capture in their picture book. 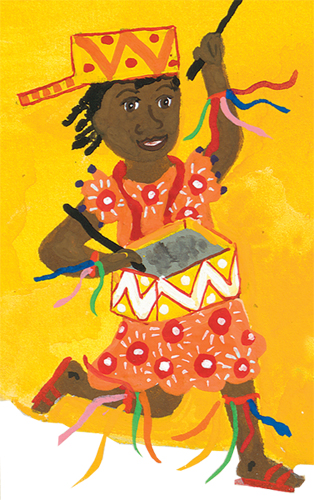 You’ve both traveled in the Caribbean, and Frané has also lived on the island of Montserrat. What aspects of Carnival and life in the Caribbean did you hope to capture in Drummer Boy of John John?

Frané Lessac: I wanted to capture the warmth of the people and the joy of color that embraces you on a Caribbean Island. With a text full of sounds and tastes, hopefully one is transported there at once.

Mark Greenwood: I wanted to have sounds to leap off the pages and capture chiming and clanging, rhythm and music with onomatopoeias that would make music to accompany Frané’s sundrenched illustrations. I wanted to make your mouth water with the flavors of ripe, juicy mangoes and rotis, folded and fried, filled with chicken and secret herbs and spices. I wanted children to make rhythm instruments and find their own beat . . . and paint them with a rainbow of colors. And I want readers to have a dance under a limbo pole! 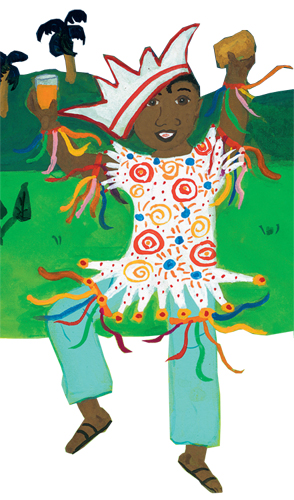 How did you come across the story of Winston “Spree” Simon?

MG: My many travels to the Caribbean led me to write a story about a young boy who became a pioneer of the steel drum. I was always interested in writing something about the musical culture of the Caribbean. Originally I drafted a story about a fictitious character. The story was titled: Winston’s Junkyard Band. Some time later, during research into steel drums, I chanced upon the story of the real “Winston.” His importance to the history of steel drums is immortalized in several calypsos and awards. Today Winston “Spree“ Simon is honored by a monument in his hometown of John John.

Besides Carnival, what other parts of Caribbean culture do you find fascinating?

FL + MG: Each island has its own unique culture heritage. The backdrop of the sea, sand, and sunshine unite them all. African culture permeates throughout in the food, religion, music, and dance. I find the language fascinating most of all: the patois or creole is linguistically appealing to hear.

Frané, can you think of instances where you experienced culture shock while living in the Caribbean?

FL: When I‘m in the Caribbean, I immediately feel at home. It’s only when I leave and return to the rest of the world that I experience culture shock. Not a day goes by when I don’t miss the islands. 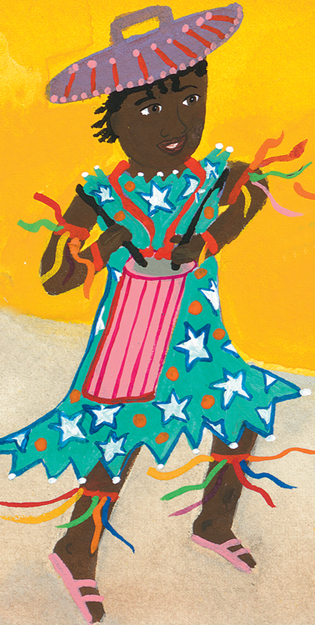 What was your favorite part of creating Drummer Boy of John John?

FL: This was my all time favorite book to create. Having the musical onomatopoeias to play with in the pictures as well as the descriptions of mouth-watering food, made the book rich on so many levels. It’s been a treasure to workshop in schools and libraries. Fun is had by all when creating Carnival masks and making instruments out of recycled materials with children.

MG: My favorite part of creating Drummer Boy of John John is that I got to write a story about a part of the world I adore. Over the years, during visits to Caribbean, I’ve met many wonderful people. I’ve enjoyed the vibrant music, the art and culture of a number of islands. I‘ve snorkeled in sparkling waters on the best beaches in the world. Frané and I hope through this book children around the world will be able to enjoy a taste of the Caribbean when they read Drummer Boy of John John.