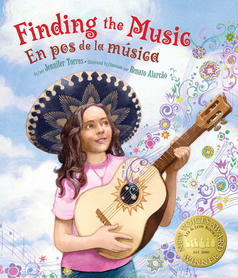 1. What about the vihuela made you want to center a children’s book around it? Do you play a musical instrument?

I can read music! I took about ten years’ worth of piano lessons and played flute in my elementary school band. But, no, I wouldn’t consider myself a musician really. For sure someone who enjoys listening, though.

As for making the vihuela the focus of Finding the Music? I gave that a lot of thought. In mariachi, the vihuela is a rhythm instrument. Sort of a heartbeat. The vihuela doesn’t carry the melody, but it’s so important to the mariachi sound. That’s sort of the role I imagined Abuelito playing in his community. He drew people together. He connected them. He was a pulse.

2. How closely does Reyna’s neighborhood reflect your own? Were any of the characters Reyna encounters inspired by people you know?

I can definitely relate to having a noisy family! And now that I live far from most of my relatives, I’ve found I really miss all those voices. Reyna’s mama is right about that.

The characters aren’t based off anyone in particular, but I absolutely drew inspiration from individuals I’ve encountered in my real life. I worked for a long time as a newspaper reporter, and one of the stories I wrote was an obituary for a man who, in his spare time, taught free mariachi lessons at a neighborhood center. His memorial became a concert, with former students performing songs as their eulogies. Through music, he had helped create a community.

I was also inspired by the student mariachi program at Cesar Chavez High School in Stockton, Calif. I first wrote about the program when it was brand new, and students were raising money to buy trajes de charro, the elegant suits mariachis wear to perform. It’s been so exciting to see the program grow over the years. One thing I really love is that the musicians of Mariachi Chavez aren’t all Mexican-American – or even all Latino. But mariachi is deeply rooted in the community they share, so they come together to celebrate the music and honor the tradition.

3. Why do you think it’s important for young children to read diversely?

One day, when I was in high school, my mom brought me home a copy of Chicana Falsa by Michele Serros. I don’t know where she found it; I didn’t think to ask. The cover had already seized me, and everything inside was about to totally sweep me off my feet.

I was never a reluctant reader. Whatever the opposite is, I was that. I know I had encountered Latino authors and Latino characters before then, but not too many and none like this. It’s a little cliché, maybe, but I don’t know how else to describe it: I could see myself in this book. (Even the snapshot on the back cover looked like it could have been pulled from one of our family photo albums.) I started to think, ‘OK, maybe I have stories worth telling too.’

All kids should have that experience. It’s electric.

(I still have my beat-up copy of Chicana Falsa, and I read it all the time. I’m always surprised, when I pull it off the shelf, at how slender it is. Like, how does it all fit in there?)

Another reason diverse books are important is that they make the world bigger. As a mom – and just someone who wants good things for young people – that’s something I really believe I owe my children. I want my daughters – and all kids - to have a rich and wide vocabulary for what is beautiful and what is brave and what is family.

4. If you were in a mariachi band, what would the name of your band be and what role would you play?

Hmm… Maybe Mariachi Lucha Villa or Mariachi Lola Beltran, in honor of famous women in mariachi. True trailblazers. In fact, Reyna is named, in part for Lola Beltran, known by many as “La Reina,” the Queen.

I think I’d be the one writing the liner notes.

5. Your book takes a subject often used as a stereotype—Mariachi players—and gives it depth and nuance. What else do you wish people understood better about the Mexican American community or experience?

I think mariachi captures the Mexican-American experience in such a beautiful way. It’s music that has harmonized the traditions of many cultures. It’s music that has migrated, influencing and being influenced by the communities through which it has traveled. It’s music that brings love and comfort to moments that are precious in the lives of communities and families. I’ve written before that one thing I find terrifically special about mariachi is that it’s a living art. It has a long, rich heritage, but that heritage, that identity, is still being sculpted. There is room for many voices.

I’ll confess to some misgivings about featuring the song “Cielito Lindo” so prominently. It felt a little stereotypical - if you’re familiar with just a snippet of mariachi, there’s a good chance it’s that song. But then I thought, if kids and families are going to hear any mariachi after reading this book, there’s a good chance it’ll be that song. And I hope that, when they hear it now, they’ll connect the music to a vibrant, complex community. (and not to an ugly stereotype)

6. Why did you feel that it was important for this book to be bilingual? Did any of the translations surprise you?

One of the best compliments I’ve received on Finding the Music was that it didn’t read like one story told twice – instead, the Spanish and English versions each bring a different layer of meaning and experience to the book. I can’t take credit for the Spanish translation, of course, but I’m so proud of that.

Making the book bilingual gives children more ways to relate to the story. More ways to see themselves in it, and more ways to share it with the adults in their lives.

I wrote the manuscript mainly in English with a good deal of Spanish woven in throughout. I don’t know if it counts as a surprise, but I was really happy to see the Spanish phrases left in the English version of the text. That element of bilingualism is so important to Reyna’s voice and her world.