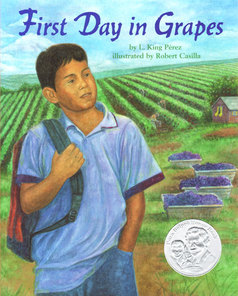 When asked why he chose to illustrate First Day in Grapes, Robert Casilla responded, "Stories that help kids become familiar with kids of other cultures or others in different situations are books that I like to illustrate. I appreciate the way the author put the main character in situations that kids deal with daily in real life and how the boy used his wits to get out of tough situations." It seems that Casilla knew that First Day in Grapes would make an impact on the world of children's literature, but he couldn't have known just how much. In January, 2004, First Day in Grapes was chosen as a Pura Belpré Award Illustrator Honor title by the ALSC and REFORMA. The Pura Belpré Award is given to a Latino/Latina writer and illustrator whose work best portrays, affirms, and celebrates the Latino cultural experience in an outstanding work of literature for children and youth. 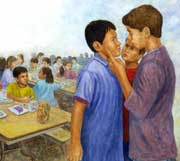 A lot of research went into the illustration of this book. "I did a lot of sketching and research on migrant families, grape farming, migrant homes, and communities and schools." With the help of his wife, Carmen, Casilla was able to find a boy of Mexican heritage as a model for the book's main character, Chico. "He did a great job," recalls Casilla. "My wife posed as Chico's mother, and my two kids and a few of their friends posed as the other children in the story." So what part did Casilla play in the story? "I played the part of Old Hoonch!" he exclaimed. Casilla said that when illustrating a book he likes to work with models because he works in a realistic style, and models provide precise reference for anatomy and character purposes. To illustrate Grapes, Casilla used Winsor & Newton watercolors on Strathmore Bristol Board, and at times pastels and colored pencils. "The board I paint on is non-absorbent, unlike conventional watercolor paper. Working on the Bristol Board allows me a lot of flexibility such as rubbing off paint to create form and highlights as well as pushing and pulling tones much like if I were using oils."

Casilla may have modeled the illustration of the bus driver after himself, but as far as the story goes, it was Chico that he related to most. "I related to the kid in this story in a wacky way when it came to avoiding bullies," said Casilla. "When I was about nine years old there was a boy who picked on me daily, until one day I came up with an idea. I thought that if I walked by him making a face that he wouldn't recognize me and leave me alone." The plan worked, Casilla said, laughing, "but now that I think of it, I doubt it was because he didn't recognize me."

Robert Casilla has a BFA from the School of Visual Arts in New York City, and has illustrated several books for children. He said he decided to major in illustration during his first year at the SVA, even though his fine art painting teacher kept trying to convince him to become a fine artist. "She felt that I'd be wasting my talent as an illustrator," said Casilla. "Lucky for me, early in my career, two editors from two different publishing houses offered me the chance to illustrate my first two children's' books." Robert Casilla lives in Yonkers, New York, with his wife, Carmen, and two children, Robert Jr. and Emily Michelle.