George Crum and the Saratoga Chip

Gaylia Taylor began writing for children after she retired from many years working as a Reading Recovery® teacher.  Taylor’s desire to write has been with her a long time. “When I really think about how I became a writer,” says the author, “my mind goes back to the very first time I remember being fascinated with a book.  It was book of Mother Goose nursery rhymes, and it had a big impact on me.”  Taylor has written several beginning reader stories for Bebop Books, and now talks about her first published picture book, George Crum and the Saratoga Chip. 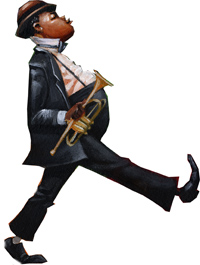 The book is an account of the life and career of George Crum, a biracial chef who is credited with the invention of the potato chip at a Saratoga Springs, New York restaurant in 1853. Taylor stumbled across George Crum’s story while researching African American inventors on the Internet. “I’m always looking for a story to tell, and George Crum caught my attention because his invention, the potato chip, is loved by so many people,” says the author. “I have to admit that a story about the potato chip peaked my own curiosity, because it is my favorite snack.” The more Taylor read about George Crum, the more interested she became in his life. “It turns out that George did not intentionally invent the potato chip,” Taylor comments. “He accidentally concocted it while trying to appease a customer.” The author says that all her research described George Crum as having a very distinct and colorful personality. “I just couldn’t let him go,” says Taylor. “I said, ‘George, we’ve got a story to tell’”

Taylor’s research started online, but she soon contacted the Saratoga Springs Historical Society for further information. Books and newspaper articles also aided her in bringing George Crum’s story to life. “In the beginning I was more interested in the potato chip,” says the author. “But as George came alive, it was the man himself who made a connection with me.” Taylor admires George Crum for his perserverance, and for following his dreams despite the prejudices facing him in the mid-1800s. “His determination and love for cooking led him to open his own restaurant,” the author comments. “It was a favorite to some of the most prominent figures of the day, and to those with lesser fortunes as well.”

During a presentation on how a book is made, Taylor was able to share certain stages of the book’s development with students and tell them some of the highlights of George Crum and the Saratoga Chip. “There wasn’t a sound in the auditorium,” says Taylor. “Just one hundred and fifty excited second graders.”  Taylor hopes all readers will gain a strong sense of the era in which George Crum lived, and an understanding of the man who didn’t let adversity get in the way of his dreams and passions. “Staying true to himself led to George Crum’s true success,” says the author. “It’s my hope that every time a reader takes a bite of the most incredible snack on Earth, he or she will remember the story of George Crum and the Saratoga Chip.”

Gaylia Taylor lives in Norfolk, Virginia with her husband.