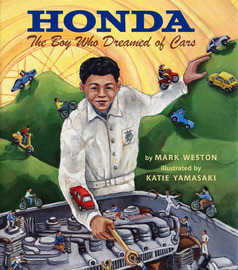 HONDA: The Boy Who Dreamed of Cars, written by Mark Weston and illustrated by Katie Yamasaki, brings the story of Soichiro Honda, founder of the Honda Motor Company, to children. The idea for this book about Honda grew out of the research Weston did for his adult book, Giants of Japan: The Lives of Japan’s Greatest Men and Women. As Weston read biographies, magazine articles, and newspaper articles, Honda’s story grabbed him as one that would appeal to young readers. “I thought his story would be good for children,” he says, because “his story is one of rags to riches—from sweeping a garage where he was not even allowed to touch the cars to starting one of the greatest car-making companies in the world.” As Weston developed his manuscript, he discovered that there are special challenges to writing a picture book. “Writing for children, one must define ‘piston,’ ‘carburetor,’ and ‘transmission.’ I also wrote more simply and [more] about Honda’s childhood.”

Weston himself gained knowledge of cars through researching and writing the book. “Learning about Honda made me better appreciate the complex process of making cars,” he says. “Each car has many hundreds of moving parts, all of which are coordinated perfectly. It is a miracle that such complex machines are mass-produced
today by the tens of millions.”

Honda himself, as well as his cars, made an impact on Weston. He speaks highly of Honda’s lack of pretension. “I was impressed that he would show up at banking meetings in his overalls, and that he retired at the relatively early age of sixty-six so that younger men could keep the company innovative.”

Now that the book is about to be published, what still surprises Weston? “How few Americans know that there was a man named Honda.”

Illustrator Katie Yamasaki began her research by delving into many books. “My initial research for this book included a lot of Auto Education 101,” says Yamasaki. “I grew up [in Detroit] surrounded by car culture, but as far as the mechanics of cars and motorcycles went, I knew very little. I don’t have a car and have never been very mechanically inclined. I studied many books on Honda motorcycles and cars, learning about how they worked. I also looked at endless books on Japan during the 1900s.”

After the initial phase of research, Yamasaki wrote to the Honda Motor Company for permission to look at their photo archives. Instead, the company invited her to take an amazing, all-expenses-paid trip to Japan. “I took the train all around the country, studying the landscapes, architecture, and color palette. I visited Honda plants, world headquarters, and specialty theme parks and speedways. I visited the Honda Collection, home to all models of Hondas from all time periods. I visited Soichiro Honda’s office, still as it was when he was alive, the main difference being that where he once sat at his desk there is now a life-sized picture of him, smiling, mounted on foam core. Pretty surprising when you walk in!”

For Yamasaki, Honda’s most impressive aspect was his imagination. “I think he is a wonderful example of how any big thinker has to be tuned in to his or her imagination and listen to ideas that might seem odd to the general population. I always try to teach my students that if you want to be a great scientist, you have to develop your imagination, your visual vocabulary, and your ability to make things with your hands. If you want to be a great artist, you have to learn about the way the world works—from politics to the sciences. Any great thinker or creator has to be able to mix the subjects together. Soichiro Honda is an example of someone whose mind and hands worked in many ways.” Yamasaki hopes that her illustrations convey this blend of imagination and science. “We are surrounded by facts and realistic imagery in our everyday life, but that imagery doesn’t always best describe how we feel about the world in which we live,” she says. Instead, she worked on bringing imagination to the mechanics of automation. “I believe Honda found a lot of magic in his work, and I tried to show the imaginative, fun, subconscious part of creating that doesn’t always come across in technical paintings or mechanical labor,” Yamasaki concludes.