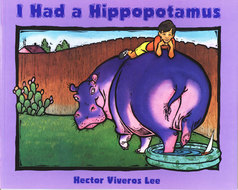 I Had a Hippopotamus

Of the many toys I received as a child, I remember a few. I remember the Tonka trucks which were these durable steel toys. There were commercials where an elephant stood on one of the toys and it remained intact. These vehicles roamed over mounds of sand and dirt and withstood the adverse effects of wind, water, and abandonment. I recall one Christmas I received a freestanding chalkboard, which provided for hours and hours of drawing. There was a game I played, "Guess the animal" with my two younger brothers: as I would draw out an animal, whichever of my two brothers correctly guessed first received a point. I had wooden blocks with which I constructed houses and bridges, mazes and towers, skyscrapers and entire cities; and then saw them tumble into ruins by an earthquake of my design. But my favorite toys were my plastic animals, the kind with "Made in Hong Kong" printed on their bellies. I collected them, my relatives gave them as gifts, and I would plead with my father to fill up at Arco, because with every $8.00 purchase of gasoline, you would receive a pair of Noah’s Ark animals. I would place them in the backyard garden among the rosebushes and geraniums, and with a little water from the garden hose, I was suddenly in the jungles of Asia or on the savannas of Africa. This is how I played.

What I find common in all these toys is that they were simple They were hardy toys with little need for maintenance. They were versatile – I could use them in a variety of ways without exhausting the possibilities. But most importantly these toys engaged my imagination. Because of that, they provided endless hours of entertainment. Their very simplicity required that my imagination give them life.

The employment of imagination and fantasy is critical in the development of children. It allows for role playing – helping us to look at life from different perspectives. It allows for the suspension of reality as it appears. It allows for the development of folktale, myth, memory, and ghost story. It allows for children of modest means to have the richest of childhoods. It allows us to see things not as they are, but as they could be, as they should be. Fantasy is not a superfluous element in life. It is an integral part of life. I would venture to say that fantasy is as REAL as reality itself. Fantasy does not have the traits that allow us to verify it with our five senses, but neither do integrity, conviction, justice, peace, hope, and love. I don’t think anyone would doubt their reality. Fantasy has the power to affect us, to move us, to inspire us, and to make us laugh.

We should never underestimate imagination’s ability to affect us. After all, fantasy moves us to believe in the tender friendship of a spider and a pig. It allows us to regale in Max’s world when he is sent to his room for being a wild thing. It will tempt us to try green eggs and ham, here or there. It helps us imagine how a young girl like Ruby Bridges can challenge hatred and racism with forgiveness. Fantasy allows a velveteen rabbit to remind us of what it means to be "real."

Fantasy and imagination figure prominently in my art because it played such a vital role in my childhood. It is a point of departure. It is a doodle in my journal gone astray, an idea waiting to be born. It keeps me amused and entertained when I am bored. It provides support for a vision not yet seen and music not yet heard.

Fantasy appears in my work because it appears in my life. Truth be told, it just is always there. I cannot escape it. It is not necessarily escapism, where one flees to faraway landscapes. Rather it is acknowledging that which surrounds us always. It is this unique ability to bridge time and space in the present, this ability to see things as they really are, or as they should be, and bringing that about.