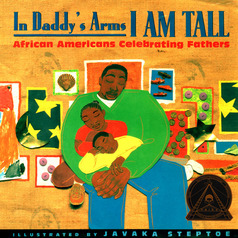 In Daddy's Arms I Am Tall

I've thought about illustrating children's book all my life. Being the son of John Steptoe, people always asked if I was planning to follow in my father's footsteps. Sometimes I would say yes, sometimes I would say no. But I realized though I might walk a similar path, I will always be making my own footsteps.

I knew I always wanted my first book to be special (and every book after that). I met with Lee & Low a couple of years after my father passed on the advice of [children's book illustrator] Pat Cummings. I liked them and they liked me, and a few months later they gave me a call and asked if I would be interested in doing a book on fathers. At that time in my life I was thinking a lot about my relationship with my father and ideas of manhood. What is a man? What does he do? How does he act, etc. etc. I thought that this book would be perfect. I was able to think about my father and how he affected me, and how I affected him, and give something to him by honoring his memory.

Coming up with initial ideas most of the time was easy. But bringing an idea to life–finding the right materials, composition, and style–took forever for some pieces, while others just came to me. I don't think there is one illustration that has not been through some drastic transformation. Each of the poems was so different and I wanted to give each one its own individuality. This was both freeing and arduous. On one hand, I could test the perimeters of my imagination and go just about anywhere. On the other hand, I had to reinvent the book with each new poem. I kind of threw away the rules and got into the process of creating. I think I learned a lot more this way and hopefully created something a little more interesting.