John Lewis in the Lead

How does an Alabama sharecropper’s son grow up to help change his world? For John Lewis the journey began as a boy experiencing the injustice of segregation and the inspiring words of Dr. Martin Luther King, Jr. After finishing high school, Lewis joined with Dr. King and other civil rights leaders who believed in fighting segregation peacefully. From Nashville, Tennessee, to Selma and Montgomery, Alabama, Lewis was in the forefront of the major civil rights protests of the 1960s. In the face of physical attacks, he persevered with dignity and a devotion to nonviolence, helping southern black people gain their right to vote. Lewis continued his commitment to human rights with words and action from his home base in the South, straight to the nation’s capital. In 1986 John Lewis was elected to represent Georgia in the United States Congress, where he continues to serve today. John Lewis in the Lead: A Story of the Civil Rights Movement celebrates the life of a living legend of American history. Here, Kathleen Benson shares her insight on John Lewis and elaborates on what co-writing with her late husband, Jim Haskins, was like. 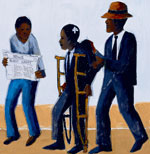 Jim Haskins was the author of more than one hundred books for children. Kathleen Benson co-authored more than twenty of them. “I began helping Jim with his books around 1970,” recalls Benson. “I worked on nearly all the books he published from then on. Some I co-wrote and for others I did research, typed or edited manuscripts, and even compiled indexes.” Benson says that she and her husband usually had a clear understanding of the division of labor for co-authoring a book. “Jim came up with the majority of the ideas for the books. He dealt with the editors and publishers,” Benson says. “I took responsibility for pulling the threads together and seeing that the final work reflected the facts as well as the thematic intent of a project—effectively lots of detail responsibilities.”

Haskins’s work focused mainly on the African American experience, his ethnicity. Benson, who is herself Caucasian, would undertake the process of writing from outside her culture. Benson says that she never pretended to know what it felt like to be African American but did develop a sensitivity to racial issues. “Loving someone of a different racial or ethnic background provides opportunities to view the world through their eyes,” Benson says. “Jim often suggested books for me to read about the African American experience. In the course of researching his books, I learned more. I believe this sensitivity to other ethnicities has influenced my career at the Museum of the City of New York, where I have worked with different ethnic groups to develop exhibitions and engaged in outreach to New York’s many ethnic communities.”

John Lewis in the Lead: A Story of the Civil Rights Movement is Haskins and Benson’s final book together. Benson was very interested in learning more about John Lewis and how he became instrumental in the civil rights movement. “I was fascinated by Lewis’s lifelong determination to fight for what was right,” she says. “Lewis’s parents had counseled him not to make trouble. But when he was a teenager, Lewis heard Dr. Martin Luther King, Jr. on the radio talking about the Montgomery bus boycott, and he came to believe that there was such a thing as righteous trouble.” Benson goes on to say that Lewis faced opposition from all fronts in his quest for equal rights—even from his own family. “Lewis’s family was afraid that his father would lose his job or that they would have to leave the land that they lived on as tenant farmers. He did not want to put them in danger, but Lewis believed he had to continue to fight for what he believed in. It must have been very hard, but Lewis broke away from them, choosing the cause over his family.”

Benson says she is looking forward to sharing this book with children. “I’ve already shared it with my teenage daughter,” the author comments. “The copy I gave her was personally autographed by Congressman Lewis, and she was impressed that Lewis had known Dr. King.” When asked what she hopes readers will take away from this book, Benson answers: “I hope they will take away a sense that one individual really can make a difference.”