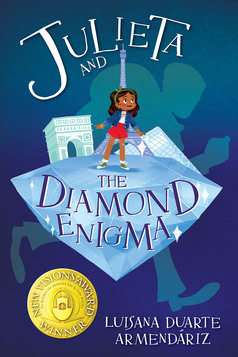 Julieta and the Diamond Enigma

Nine-year-old Julieta is bursting with excitement over her upcoming trip to Paris. She’ll be accompanying her father, an art handler for Boston’s Museum of Fine Arts, on a trip to pick up pieces from the Louvre. A few days into their trip, however, a thief absconds with the most valuable object they were to take to Boston, the Regent Diamond. Because they were first on the scene, the pair become suspects in the crime, but ever-alert Julieta may have gathered enough clues to catch the real jewel thief. Though Julieta’s impulsive and energetic personality sometimes makes her feel younger than nine, she is an endearing protagonist, and the loving relationship she has with her parents makes them an important presence in the narrative. The incorporation of French and Spanish words and phrases adds another valuable layer to the text, which also includes additional information on some of the art featured in the story. While the mystery isn’t terribly complex, readers will enjoy seeing Paris with the irrepressible Julieta.