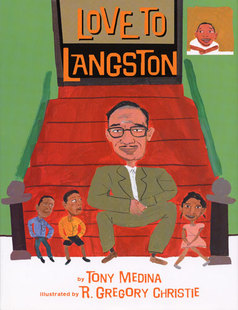 In this collection of original poems, Medina honors the groundbreaking poet of the Harlem Renaissance. The story of Hughes’s life unfolds from his early childhood (“Little Boy Blues”) to his later days (“Sometimes Life Ain’t Always a Hoot”). The twists that the poet’s life took, the people (both good and bad) whom he met, and the important places he visited are vividly brought to life. Some of the poems are based on the subject’s own work, “Grandma’s Stories,” for example, is modeled on his “Aunt Sue’s Stories.” Medina’s words stand on their own while they honor the tradition established by Hughes. Detailed notes tell the story behind each selection. Christie’s full-page, vibrant illustrations and broad expanses of bold, flat colors and stylized figures invite readers into the world of sharecroppers, ocean liners, and libraries. This book has many uses: pair it with Floyd Cooper’s Coming Home (Philomel, 1994) to introduce the poet. Or, combine it with J. Patrick Lewis’s Freedom Like Sunlight (Creative, 2000) or Jacob Lawrence’s Harriet and the Promised Land (S&S, 1993) for a unit on poetic biographies. A stunning collaboration.