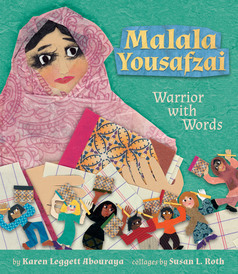 This detailed picture book celebrating Malala Yousafzai shows how she has used her position in the global spotlight to advocate for children's rights. The story opens with Yousafzai's speech at the U.N. in 2013: "Our words can change the world." It then moves back in time to ask, "Where did Malala learn that her voice and words could change the world?" With a beautiful collage of green land rising to purple and white mountaintops, her upbringing in the Swat Valley of Pakistan is described as nourishing and happy, with a strong family unit. Her words from the blog the BBC began to host in 2009 appear, as do words from her later writings, to describe life under Taliban rule. The latter are pictured as rows and crowds of men in baggy shalwar kameez with scarves tied around their faces and dark holes for eyes. Her family's brief move out of Swat is included, as is her National Youth Peace Prize awarded in Pakistan, details that show both the devastation within Pakistan and her own country's appreciation of her work. The text appears on ruled notebook paper, and paper-and-fabric-collage artwork alternates between focusing on Yousafzai and crowd scenes that show her impact. The cloudy black around the eyes on some faces may be a bit distracting, but the illustrations work well overall, with strong use of color and shadow to convey emotion and energy. A Spanish version is available as well, in a translation by Eida de la Vega. An earlier version of the text was published under the same title in 2014 with illustrations by L.C. Wheatley. A superior telling of Yousafzai's life and work thus far.