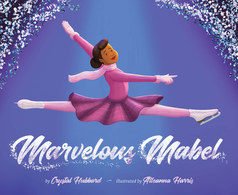 The life of ice skater Mabel Fairbanks, a tenacious and creative pioneer who faced heavy challenges on her road to becoming America’s first Black figure skating star, and who had an impact on many skaters who came after her. Orphaned at a young age and kicked out of the homes of relatives, she ended up sleeping at a church or in Central Park on a bench. She eventually found homes with others—a family in need of a nanny, and later that building’s handyman, Uncle Wally. Her proximity to Central Park’s ice skating rink led her to purchase a pair of too-large skates from a pawn shop, and her love of skating was born. At the rink she faced racism from her fellow skaters; white parents even forced their children to leave the ice because she was Black. The rink manager was so impressed with her skills that he invited her to come back regardless of policy. She eventually took her own skating tours throughout North America, but she wasn’t hired for large professional skating shows due to her skin color. After Fairbanks retired as a skater, she coached other students and gave back in many ways to the figure skating community. Back matter includes an afterword and selected bibliography. Beautifully crafted kinetic illustrations highlighting New York City’s locales and its inhabitants are at their finest, and come to life when Fairbanks skates. VERDICT Every twist and turn is captured and the movement is dynamic in this book; a pleasure to read and to share. Highly recommended for early nonfiction collections.