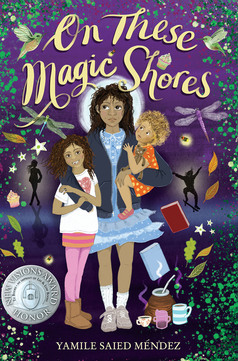 On These Magic Shores

Twelve-year-old Minerva Soledad Miranda is no stranger to shouldering more than her fair share of responsibilities. While Mama works hard at two jobs, Minerva helps out at home with her two younger sisters, Kota and Avi. When Mama doesn’t come back from work one night, but glitter is left behind on the girls’ bed and pink cupcakes are found on the windowsill, Minerva doesn’t know what to think. Her sisters believe in Peques, fairies that are part of Argentinian folklore. Assuming that Mama will return soon, Minerva attempts to keep things as normal as possible—she worries her immigrant family may face deportation or foster care if they’re found out. Try as she may, caring for herself and her two sisters proves nearly impossible, and as Minerva drags her sister to her audition and tries out for the part of Wendy in Peter Pan, she is cast in the culturally insensitive role of Tiger Lily. Feeling like she is fighting a losing battle but unsure whom she can trust with her secrets and worries, Minerva has to look within herself and to her new friend, Maverick, before the family is broken apart. When Mama does return, it looks like even fairy magic isn’t enough to save her from a mysterious illness, and Minerva is faced with more difficult decisions regarding her extended family, her heritage, and her culture. VERDICT Mendez manages to successfully weave multiple story lines and characters throughout the novel, and each is satisfactorily resolved at the end. Minerva’s predicament will reach many readers grappling with similar insecurities or uncertainties in this timely, emotionally charged story.