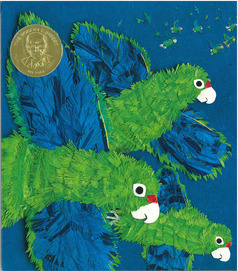 Before humans arrived on the island, parrots numbered in the hundred of thousands. By 1967, only 24 birds remained. Since then, scientists in the Puerto Rican Parrot Recovery Program (PRPRP) have established aviaries to raise the birds in captivity and release them in the wild. Using a vertical page orientation, Roth has plenty of space for detailed collages that depict the parrots’ lives and struggles above human activities that have altered the island’s ecosystem over the centuries. Taínos, Spanish explorers and settlers, African slaves, and others hunted parrots for food, cut down nesting places, and introduced animals that ate their eggs. After the United States took control, deforestation continued. Some military history and political questions such as the debate about Puerto Rico’s commonwealth status slow the narrative. When the focus shifts to the strategies, setbacks, and successes of the PRPRP, the story soars. From constructing nesting boxes to training captive-bred birds how to avoid hawks, the program is slowly rebuilding the parrot population. After the main story, several pages of photos accompany further explanations of the group’s work. In addition to their list of sources, the authors supply a detailed time line of events. Like this team’s The Mangrove Tree (Lee & Low, 2011), this title offers an engaging and hopeful look at environmental restoration.