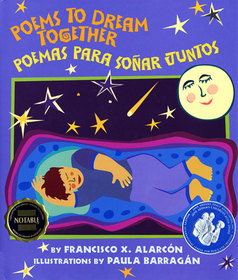 Author and poet Francisco X. Alarcón has always followed his dreams. “I believe that dreams are an essential component of our life as humans,” says the author. “Life would be really incomplete and maybe impossible without dreams. We spend a good portion of our lives dreaming. Sometimes real life situations are played out in dreams and we can envision unexpected resolutions to difficult problems.” Poems to Dream Together is a bilingual poetry collection based on the author's dreams and childhood.

Alarcón wanted to be a poet for almost as long as he can remember. “I was thirteen years old when I sat down to write the lyrics of some songs composed and sung by my Grandma Elvira in Guadalajara, Mexico,” recalls the author. “She had composed these songs from memory but never wrote them down. My first poems were about retrieving my grandma’s songs.” As Alarcón grew older, his ambition only grew. “I had dreams in which I saw myself as a writer and poet. Twenty years later, I published my first book of poems.”

Poems to Dream Together contains  bilingual poems focusing on dreams, family and community. “Some of the poems came to me first in dreams, and they reflect the notes I wrote down just after I woke up,” says Alarcón.  “I have learned to have a lot of respect for dreams, because they are wise and meaningful. There is so much we can learn if we pay more attention and listen to our dreams.” Many of the poems also revolve around family, which has influenced this poet greatly. “I come from a big Latino family in California,” says Alarcón. “We are seven siblings, five brothers and two sisters. All my brothers and sisters are totally bilingual, but I have to say that my eight little nieces and nephews are the direct inspiration for this book of bilingual poems. This book is really for them.”

One of the poems in the book celebrates César Chávez, and the elementary school that was named for him. The author had the opportunity to share this poem and the others in the book with some of the students of this school. “I was interviewed by two fifth-grade children at César Chávez Elementary School for a local television program. The children couldn’t take their hands off the book,” says Alarcón. “They asked me to read the poem about the rededicating of their school to honor César Chávez, and they told me they loved the illustrations by Paula Barragán. I am very happy to get this response from children.”

“I want to celebrate dreams through poems that are very accessible and at the same time deep and meaningful,” says the author. “I believe children are the big dreamers of the world.” Francisco Alarcón wrote Poems to Dream Together to send a message of peace, hope, and love. “The ultimate message of my book is: let’s all act out our dreams for a better world, a world where there’s no word for war and all living creatures share the bounties of this earth. This is a book of bilingual poems written by a Latino poet, but it really has a universal appeal.”