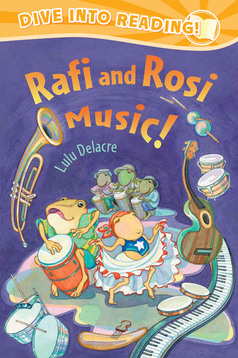 The fourth installment in Delacre's early-reader series centers on the rich musical traditions of Puerto Rico, once again featuring sibling tree frogs Rafi and Rosi Coquí. Readers learn along with Rafi and Rosi as they explore bomba, plena, and salsa in three chapters. A glossary at the beginning sets readers up well to understand the Spanish vocabulary, including accurate phoneticization for non-Spanish speakers. The stories focus on Rafi and Rosi's relationship within a musical context. For example, in one chapter Rafi finds out that he attracts a larger audience playing his homemade güiro with Rosi's help even though he initially excluded her: "Big brothers only." Even when he makes mistakes, as the older brother, Rafi consoles Rosi when she is embarrassed or angry at him. In each instance, their shared joy for music and dance ultimately shines through any upsets—a valuable reflection of unity. Informational backmatter and author's sources are extensive. Undoubtedly these will help teachers, librarians, and parents to develop Puerto Rican cultural programs, curriculum, or home activities to extend young readers' learning. The inclusion of instructions to make one's own homemade güiro is a thoughtful addition. The Spanish translation, also by Delacre and published simultaneously, will require a more advanced reader than the English one to recognize and comprehend contractions ("pa'bajo-pa-pa'rriba") and relatively sophisticated vocabulary. A welcome, well-researched reflection of cultural pride in the early-reader landscape.