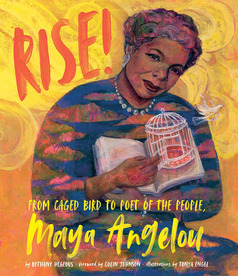 Maya Angelou: writer, performer, activist. In a foreword, Angelou's grandson, Colin Johnson, prepares readers for a story that is not at all a fairy tale and will inevitably prompt conversations. Hegedus' poem starts with young Maya and older brother Bailey heading to Stamps, Arkansas, where they will live with their paternal grandmother, Momma Henderson, owner of the local general store. Illustrating Henderson's stoicism in the face of racism, Engel uses the symbolism of a scale with Henderson as its fulcrum, Maya weighing down the pan on one side as jeering white girls are lifted on the other. The children's brief sojourn with their mother and her boyfriend is marred by his sexual abuse—the text alludes to "a visit to the hospital"—of young Maya; his shadow on the wall as Maya huddles on her bed will haunt readers. Back in Stamps Maya discovers her love of reading, powerfully depicted in an image that shows words swirling above her head. The narrative continues, Hegedus' spare words finding symbolic representation in Engel's oil paintings, as Maya moves through her difficult childhood to emerge as a rare talent with a young son to support, later to turn her talents to activism. The final page shows an African American girl reading and reflecting on Angelou's words; they swirl about her, closing the circle. This deeply important story will foster further discussion around racism, sexual abuse, and courage.