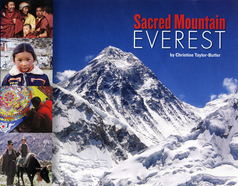 Older books on Everest tended to concentrate on the story of New Zealander Sir Edmund Hillary and Sherpa Tenzing Norgay’s historic ascent. This new book, with photos showing climbers from 1920 to 2008 and glimpses into the lives of the long-term inhabitants of the region, emphasizes the relationship of the Sherpa to the mountain they call Chomolungma, “Goddess Mother of the World.” Living for many centuries in the Himalayas, the Sherpa have adapted to the climate and the land and learned to use their limited resources. They have continued to embrace the Buddhist religion, and some of the most interesting photos picture religious practices. Taylor-Butler effectively describes the efforts of Nepal’s government, Tenzing Norgay’s sons and other Sherpa and several foundations dedicated to the preservation of the region and its people to keep the mountain environmentally safe while more and more climbers from many countries tackle one of the greatest challenges on earth. . . . For young armchair travelers who may make the climb someday, this mixture of science, geography, culture and the original extreme sport is irresistible.