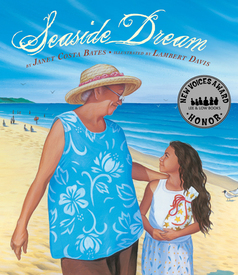 In Seaside Dream, Cora is excited to celebrate her grandmother's birthday with her large Cape Verdean family, but is worried about what gift to get her. In this BookTalk, New Voices Award Honor-winning author Janet Costa Bates talks about her inspiration and her own experiences in the Cape Verdean American Community.

All four of my grandparents emigrated from the Cape Verde Islands to America. Numerous and severe droughts too often meant starvation, so many of the islanders left in search of a better life. A great number of them were attracted to the coastal areas of Southeastern Massachusetts. As a child I lived next door to my father’s mother, the inspiration for Grandma in Seaside Dream. Spending time with her, often listening to stories about Cape Verde, was like a gift to me. Seaside Dream is my gift to her.

Have you ever been to Cape Verde? How do you stay connected to your heritage? 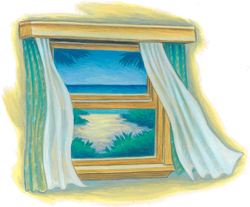 I have never been to Cape Verde but I was surrounded by a strong Cape Verdean-American community and I have always felt very connected to the islands. There are many Cape Verdean events, festivals, parades . . . Cape Verdeans don’t only remember where they came from, they celebrate it!

Your manuscript for Seaside Dream was a New Voices Award Honor. What was it like to receive that recognition?

The path to publication has been a long, slow one. I often questioned whether or not it was worth it for me to keep writing. The New Voice Honor Award was a clear sign that I should continue.

Do you ever have very vivid dreams, like Cora has?

Yes, but I typically forget them about a minute after I wake up. Cora's memory is much better than mine.

What was the biggest challenge in creating Seaside Dream?

The first two versions of Seaside Dream were set at Christmastime. I felt it would be better to have the story take place in the summer but my first few attempts at changing the season did not work out very well. I guess I finally succeeded, but honestly, I have no recollection of writing this version.

How do you celebrate birthdays in your family?

Birthdays are often small celebrations with family and friends. For my father's 75th birthday, however, we decide to go for a big surprise party. And it worked—250 people actually managed to keep a secret!

So what's the difference between munchupa and kachupa? And which is it for you? 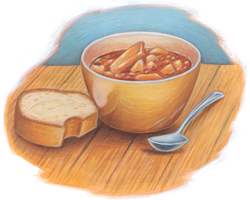 The only difference between munchupa and kachupa is how you say and spell it! The pronunciation and spelling varies depending upon which island your family came from. I have heard many heated munchupa/kachupa debates. My mother always made the dish when I was growing up and her family, being from the island of Brava, calls it munchupa. But now it is usually my father who makes it, and his family, from San Antao, calls it kachupa. I am of the mindset that if someone is willing to make it for me, I am happy to call it whatever he or she calls it!

What do you hope children take away from reading Seaside Dream?

I hope Cape Verdean children feel proud seeing themselves represented in this book. I hope non-Cape Verdean children develop a curiosity about the islands and their beautiful people. I also hope it helps all children look for reasons to celebrate their own families and cultures.