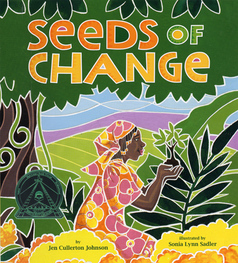 Seeds of Change tells the story of Wangari Maathai, the first African woman, and the first environmentalist, to win the Nobel Peace Prize. In this BookTalk, author Jen Cullerton Johnson and illustrator Sonia Lynn Sadler discuss Wangari Maathai's achievements, travel, and the environment.

When and how did you first learn about Wangari Maathai? What grabbed you about her story? What part of her story is the most moving to you?

Jen Cullerton Johnson: Wangari Maathai’s life is incredible. She is an environmentalist, scientist, and women’s right’s activist who inspired her country of Kenya to plant 30 million trees and in doing so helped give women skills to earn a living so they could feed their children. What moves me the most about Wangari’s story is her message of harabee, which means “let’s work together.” We can solve problems if we work together.

Sonia Lynn Sadler:I first learned about Wangari Maathai through my aunt, Barbra W. Huggins, who is very active in her community and had met Wangari Maathai. The most moving part of the story for me was when she was beaten and arrested but still continued with her quest, even though she still had a great deal of trouble and was injured. The other part of the story that moved me was that she succeeded and won in the end.

Seeds of Change portrays Wangari’s deep love of learning and of science, even though most girls in Kenya were steered away from both. Did you enjoy school as a child? Did you enjoy science?

JCJ: I enjoyed learning about living things. Before my parents moved to Chicago, I grew up in a very small community called Dune Acres on the shores of Lake Michigan. Often times my brother and I would play outside all day, traipsing through the woods or swimming in the lake. I am a person who learns by doing so learning about living things helped me enjoy as well as respect nature.

SLS: School was fun at times, especially art class. I did well in biology because I could illustrate cells in plants and animals. As long as the class had a visual aspect that I could understand I did well in that class. Education in my family was always stressed as a necessity and a way to improve one’s lot in life.

Wangari has traveled a great deal, first to gain an education, and later to share her message of environmentalism and women’s rights. Both of you have also traveled. Do you think travel changes the way people see the world?

JCJ: Travel gives you the magnificent gift of experiencing other cultures and customs and understanding how you interact with them. I’ve traveled to many countries around the world. Each city I visit, each small village I stay in, I learn the lesson again and again: we are all connected. And I think that is really what is behind Wangari’s story. We are all living beings connected to each other. Animal, plant, sky and earth, we are one.

SLS: I do believe that it broadens a person’s perspective to travel and experience other cultures. My father was in the military at a time when integration was just beginning in the United States. The military was a culture in itself and a little more integrated than society at that time. When I was younger we traveled every three years or so to live and experience a new place and different people. We lived in Germany, outside the country, and in several states in the U.S. I found that there were more similarities between people than differences. Basically, it was the way people think about each other, without knowing, that was the problem. 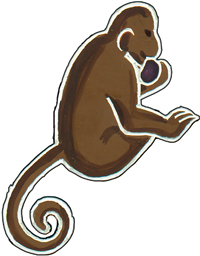 Thanks to Wangari Maathai, people all across Kenya planted thousands of trees and helped to heal the damaged environment. What do you think Wangari’s methods can teach us about protecting the environment here in the United States?

JCJ: Wanagari did something amazing. She helped the environment by helping people at the same time. In the United States, we have great opportunities to give people jobs that help save the environment through Green Building, alternative energy research, and laws that prohibit the dumping of chemicals in our water systems. Right now may be a difficult time for the environment but it is also a time when people are working their hardest and their best to save our planet.

SLS: Part of the success of our country’s history is the availability of natural resources like oil, timber, and minerals. Except for timber the resources cannot be replaced. But the damage to the environment can be repaired, as Wangari has shown us by an organized campaign to plant trees.

Jen, was it hard for you to take all the information available about Wangari Maathai and fit it into a picture book??

JCJ: When I wrote Seeds of Change, there was very little commercial information about Wangari. There was only her biography, Unbowed, and her book about the Greenbelt Movement and academic articles. What struck me as important when writing Seeds of Change was how eloquent a speaker Wangari Maathai was when she talked to crowds. She inspired thousands of people to plant 30 million trees. So I wanted to make sure that as kids read Seeds of Change they would read Wangari’s own words. Many of the quotes in the dialogue are Wangari’s actual words, from her Greenbelt Movement speeches to her Nobel Prize acceptance.

Sonia, when you first read the manuscript for Seeds of Change, how did you envision telling her story visually? What mediums and techniques do you use?

SLS: After reading the manuscript of Seeds of Change, I envisioned the lush scenery of plants and animals as an environment that Wangari grew up in. I thought in terms of broad panoramic views, wanting to put in everything that Wangari might see. I love the use of color and pattern to show the emotion of a scene. My favorite medium is scratchboard, which was a technique that my mother showed me when she was teaching. In high school and college I studied the techniques of Audrey Beardsley and Japanese woodblock printing, graphic styles that heavily influence my artwork.

What was the biggest challenge in creating Seeds of Change?

JCJ: Wangari lived though some very complicated situations. She was a girl who wanted to go to school when girls weren’t educated. She fought against greedy companies and was jailed. She was outspoken in a country that expected women to know their place. These are difficult situations to discuss in a picture book. Many writers and editors would refuse to go there. But to stay true to Wangari’s story, I went there and thank God Lee & Low went there. Reading Seeds of Change, kids will see that Wangari stood up for herself and others. She did not shy away but fought for human and environmental rights.

SLS: The biggest challenge was having to decide to eliminate some illustrations because the book can be only so many pages.

I had to do a lot of research for the project. I needed to get a feel of the land, plants, animals, and people. I had to study what people wore, especially women and the patterns of dress and hairstyles. I always research what I am illustrating to give the pictures some accuracy.

What do you hope children will take away from reading Seeds of Change?

JCJ: Believe Wangari’s message: “Young people, you are our hope and our future.” Go plant a tree. Know that an idea as small as a seed has the possibility to grow into the tallest of trees. Work together.

SLS: I hope children see the great importance of education and what one person can do if they have a purpose and a will to get it done no matter what. Also, what they themselves can do to help the environment.