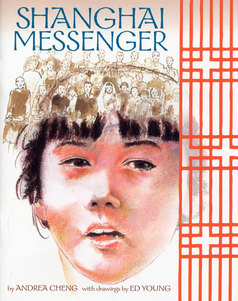 Ed Young is one of the most versatile and highly honored illustrators of children’s books today. Born in Tientsin, China, he later moved to Shanghai, where he was raised.  In the 1950s he moved to the United States and attended the Los Angeles Art Center.  Later, Young taught at Pratt Institute, Yale University, the Naropa Institute, and the University of Southern California.  He was awarded the Caldecott Medal for his illustrations in Lon Po Po: A Red Riding Hood Story from China and Caldecott Honors for book Seven Blind Mice and The Emperor and the Kite by Jane Yolen. We recently caught up with Ed Young and spoke with him about his art and the illustrations he created for his latest book, Shanghai Messenger.

How did you become a children's book illustrator? 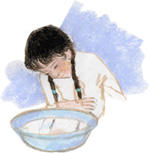 I always loved to draw and then I also found out that I love to tell stories.  To tell stories by pictures naturally, they become the illustrations.  I became an illustrator for advertising first, and then for periodicals, then finally, for children’s picture books.

Did your parents encourage you in your decision to become an illustrator?

My parents were in China when I went to school in the United States. At the time I was studying architecture.  During that time, U.S = China relations were strained because of the political situations in Vietnam and Taiwan.  By the time China reopened its doors, I had already become an illustrator.  However, all along my parents encouraged me in artistic endeavors, so when I did become an illustrator, they weren’t really surprised.

What kind of research (if any) did you conduct for your work on Shanghai Messenger?

Since I was brought up in Shanghai, I didn’t need to conduct much research, but instead relied on my own memories.  I tried to convey the feeling of Shanghai, the way it sounds and feels to me.  I visited Shanghai several years ago, and much of what I remembered from my childhood had changed.  The house I grew up in used to be on the outskirts of town, on a quiet street, and now it is within in the city limits, surrounded by crowded shops.  Despite these differences, Shanghai still had the same kind of spirit.  To portray Xiao Mei and her family, I worked from photographs provided by the author of her own family, eating dinner and at the markets in Shanghai.  I also worked off photos I had of people making wontons.

What about the story of Shanghai Messenger did you feel you could relate to and why?

Have you had a chance to share the book with children? If so, what was their reaction?

I hope readers will come away from Shanghai Messenger feeling that there is great similarity in humanity, even though there is so much contrast in the eastern and western cultures.