Ask author Paula Yoo when she knew she wanted to become a writer, and you will get an interesting answer. "Honestly, I can't remember ever NOT wanting to be a writer," says Yoo. "I began writing short stories and little 'novels' when I was in kindergarten, and I would even draw a picture of myself on the back with a biography that read: Paula Yoo, age 7, is a second grader at Keeney Elementary School. This is her first book." The author laughs. "Talk about ambitious!" She goes on to say that she wanted to be a writer since the moment she learned to read. "To me, the most magical thing in the world was the ability to put words on paper to create a whole new world, an entire universe filled with fascinating characters," A pause. "Plus I wanted to have my picture on the back of a book, just like my favorite authors!" Paula's lifelong dream came true with the publication of Sixteen Years in Sixteen Seconds: The Sammy Lee Story. 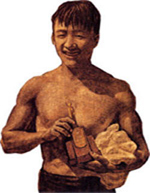 Yoo stumbled upon Sammy Lee's story by accident. "I was doing research on Korean American history at the turn of the century in California for my MFA in Creative Writing when I found an article about Sammy Lee on the internet," comments the author. "He was the first Korean American to win an Olympic Gold Medal. I found myself distracted from my MFA research and began spending time researching Sammy Lee instead of working on my thesis!" Indeed, Sammy Lee's story was a fascinating one. While he was growing up, public pools were only open to non-whites one day a week. Even worse, the day after African Americans, Asian Americans and other minorities used the public pools, they were drained and cleaned, since at that time non-whites were considered "dirty". "I couldn't believe that I had never heard of Sammy Lee before," says Yoo. "I was so proud that he was the first Korean American to win a Gold Medal despite the obstacles he faced and the prejudice against him."

Prejudice was not Sammy Lee's only obstacle. His father wanted him to become a doctor, and Sammy struggled with trying to fulfill his father's dream as well as his own dream of becoming an Olympic champion. "Anyone can relate to the universal theme of Dr. Lee's struggle to balance his dreams with his parents' dreams," says Paula. "What I love about Sammy Lee's story is that in the end, it's ultimately a beautiful father-son story about a boy who learns to respect and fulfill his father's wishes while still holding true to his own dream. It is important to tell this story because Dr. Sammy Lee's accomplishments should not be forgotten," Yoo adds. "His story is inspirational not only to Asian Americans, but to all Americans." Paula mentions that she showed the book to a neighbor's sixteen-year-old daughter from El Salvador. "She has only spoken English for three years, so she was eager to read my book," says Yoo. "She said that she really enjoyed reading it and that she related to Sammy Lee's struggle as an American child of immigrants learning to straddle two cultures." Like Sammy Lee, Paula Yoo knows that it takes determination to make dreams come true. "I want readers of all ages to realize that persistence and hard work are key to making your dreams come true."