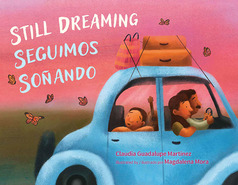 Martínez offers a bilingual Spanish and English picture book about family repatriation to Mexico. In first-person narrative style, an American boy relates his journey to Mexico from his Texas house, the only home he has ever known. In a small car, a family of three that wants to stay together instead of facing separation says goodbye to the relatives it leaves behind. As the group drives past fields, it encounters other families on the road that were forced to leave from different cities. This hopeful narrative represents the main character’s youthful reasoning while providing explicit information about the type of work migrant workers do. The art, rendered in gouache, ink, and digital media, uses a soft palette that navigates between clear and darker pastel colors. Detailed illustrations support the story and help readers understand the social complexities of this immigration tale. Although this picture book is inspired by the Mexican Repatriation of the first part of the 20th century during the Great Depression, the plot and illustrations portray a current scene familiar to present times. The English text relies on sporadic Spanglish, with a fluid Spanish translation that reads naturally. This book contains back matter with the author’s notes referring to the Mexican Repatriation and the Treaty of Guadalupe Hidalgo.

VERDICT This is solid choice for classrooms wanting to discuss the U.S.’s family separation policies and a seemingly forgotten historical event. Recommended for picture book collections.