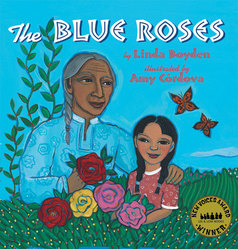 Linda Boyden’s debut as a children’s book author arrives with the publication of The Blue Roses. This touching picture book is especially significant to the author because it is based on a dream she had after her own grandfather died. "Death frightens and confuses children," says Boyden. "Adults often explain too much or nothing at all. In the old tribal days, death was viewed as part of the cycle of life and nothing to fear. That’s my story’s strongest point, that death is a part of life."

The Blue Roses, Lee & Low’s first New Voices Award winner, is a story based on Boyden’s relationship with and fondness for her own grandfather. "I have been terrified of dying all my life, primarily because of how it was explained to me as a child. As an adult, when my own maternal

grandfather passed on, I lived 2000 miles away and was too poor and too pregnant to travel back east for his funeral. I must have cried for weeks," says Boyden. Sometime after her grandfather died, Boyden dreamed of him. "[He was] standing under a trellis, within the most beautiful garden. His wrinkles were gone and his skin glowed. Like my character, Rosalie, I tried to go with him, but he told me it wasn’t my time and to stop mourning because he was happy. That dream is still with me and I haven’t feared death as much since then."

According to Boyden, "Rosalie’s Papa teaches her to love gardening. Over time he shows her how nothing ever really leaves a garden, even if it dies. After his death, Rosalie learns how much this means. A loved one may pass away, but he or she will always live in your heart."

Boyden, of Cherokee and French Canadian ancestry, is an enrolled member of the United Lumbee Nation. She earned her masters degree in Educational Psychology/Gifted Education from the University of Virginia. In addition to writing, Boyden works with elementary school children on writing projects and performs as a storyteller specializing in American Indian myths. Her hobbies include reading, drawing, hiking, sewing, and most of all, spoiling her grandchildren. A native of Massachusetts, Boyden now lives in Pukalani, Hawaii, with her husband.

Four years in the making, The Blue Roses began as a writing class assignment for Boyden. Now that the book is published, she is thrilled about the opportunity to share her book with others. "One of the most exciting aspects of being a published author is the hope that I will be able to go into schools and engage students in writing activities."