In The Can Man, Tim and a former neighbor, now homeless, bump into each other around the neighborhood as each collects cans to redeem for the deposits. Here, the author and illustrator talk about the difficulties of portraying a homeless character.

Homelessness is a difficult topic. How did you make it accessible to kids?

Laura E. Williams: I hope I have made homelessness accessible to kids. Especially in these tough economic times, there are more and more people who are losing their homes and are having to make it on the streets and in shelters. I want children to know that just because a person appears to be poor, out of work, and homeless, does not mean the person is bad. Sometimes it's just a lot of bad luck all at once. That's why the Can Man in the book has a real name—Mr. Peters—and he used to live in the same apartment building as Tim's family.

Craig Orback: Most of my books have been historical biographies, so illustrating a contemporary story with a homeless main character was a welcome challenge, and one that I really enjoyed. I treated the title character like the other characters but with the understanding that he happened to be homeless. I wanted him to be an appealing character, so I of course avoided the stereotype of a scary-looking homeless person. I found a model with a warm, expressive face that embodied the generous spirit at the heart of Laura's story.

Why do you think it's important for children to read books like The Can Man? What do you hope they learn from reading it? 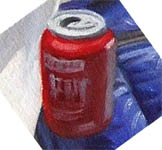 LEW: First, I hope children simply enjoy a story about a boy who sees something he wants and figures out how to get it on his own, without depending on his parents. As a teacher, I see a sense of entitlement that some children seem to grow up with, but the reality is that someone is not always going to be there to give you everything you want. If you're willing to be creative and work hard like Tim, however, you can do anything, and sometimes the real payoff is in helping someone else. Is there a lesson to be learned? Absolutely. But my first goal is always to write an interesting story that children will want to read. And read again.

CO: Diversity is important and something I know Lee & Low strives for with its books. In my own research of children's books I have not seen many illustrated books that deal with the subject of homelessness. It is a big issue in this country, so having more books for children that incorporate this subject is a good thing. Also, with our recent economic downturn, financial stress is even greater in families. That alone can be confusing for kids. With this book I hope children will learn that homelessness can happen to anyone and that everyone, no matter what their current status in life, should be treated with kindness.

What were some of the challenges in writing and illustrating The Can Man?

LEW: The biggest challenge in writing The Can Man was creating Mr. Peters so that he was not a creepy, clichéd homeless guy. He has a name and a history, so it is acceptable for Tim to interact with him. The editor, Louise May, and I didn't want children to think it is okay to talk to strangers. Another challenge was to make it believable that Tim would want to help Mr. Peters. I hope readers will see that Tim is a hard-working kid who has his heart in the right place. And the best thing is that not only does he get the joy of helping someone, he gets the added surprise of someone helping him.

CO: One challenge was finding models for my paintings that fit the characters in the story. I like to take photos of people in costume and play with lighting to give the paintings an added sense of realism. I found Tim after I sent out an email to former students with a request for a model. I happened to meet the model for The Can Man (or Joe Peters) at a roller skating party. He was my friend's new boyfriend. I made a few trips to local thrift shops to find clothing and was thrilled when I came across a big shiny puffy jacket for Tim, just as I had imagined. In my opinion that jacket is the real star of the illustrations. It was a perfect contrast to The Can Man's thin, ripped, winter coat. I borrowed a metal shopping cart from my local grocery store and collected cans as props from around my neighborhood. I also spent some time looking around my hometown of Seattle for the right small apartment building for Tim to call home. He spends a lot of time on the stoop. Finally I found a building with the right number of front steps just a few blocks from where I studied illustration at art school. It was a nice full circle moment.

The Can Man deals with a lot of common issues for kids: jealousy between friends, wanting toys they can't have, frustration. Did your experiences as a child help you write/illustrate the book?

LEW: I was never jealous of any of my friends! Just kidding! Honestly, though, I think this story came more out of my experiences as a teacher and working with children, than any childhood experience. While there are certainly some children who have a sense of entitlement, I also see unbelievable kindness in young people. Tim is heroic in his generosity, but so are all the real children who did what they could to help New Orleans get back on its feet, and the children who worked so hard to raise money to help heal the devastation in Haiti. Maybe these kids gave up music money, or cash that was for a new pair of jeans, or donated time they could have spent with their friends . . . real life heroes. Another kernel in the idea of this story was a teacher friend of mine who told me that her ex-husband and the father of her five children was a homeless man in town. That really brought home to me that people who you know can become homeless.

CO: I think many of us can relate to what it's like as kids wanting things our friends have, like the right kind of jeans or, as in the book, a new skateboard. As a younger brother, I had some things passed down to me as my brother got older, and that can be hard for a child who wants new things or to feel like something is one's own. 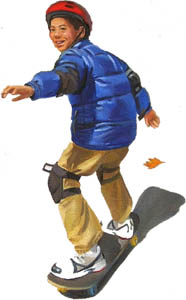 I actually started out seeing Tim as a boy with an Asian mix. I was basing him on my younger brother who was born in Hawaii and is a mishmash of many Asian and Polynesian races. As the story evolved and I talked more and more about the composition of the character's ethnicities, the editor and I chose a realistic mix of nationalities. I am half Korean and half Caucasian, and I work in a multicultural school, so it seemed only natural and totally realistic to have a mix of races in this story. And I absolutely love Craig Orback's illustrations! He did such a great job depicting the different ethnicities.

You have a very good eye! I remember starting out ten years ago with my first book thinking it might be fun to include a self-portrait in each book and see who would notice. I didn’t quite stick to that plan though. What usually happens is that for certain characters, instead of trying to find a model I will just use myself and change them enough to not look like me. The sports store scene was one instance where I decided to have some fun and throw myself into the book. I had just gotten glasses for the first time so vanity was probably the real reason!

Laura, this book was many years in the making for you. Can you tell us a little more about the path this story took from inception to publication?

Hey, who told you that? But yes, it absolutely was a loooong time from initial idea to holding a finished book in my hands. I don't exactly remember the dates, but let's just say that several years ago my agent showed a version of The Can Man to Louise May, the editor, and I believe I made a couple revisions, but in the end it just wasn't working. A couple years passed, and I looked at the story again, did some revisions, and my agent submitted it to Louise again. After more revisions, I finally had a sale! But even after a manuscript is sold, there is always more tweaking to make each sentence work. It may have taken years, but it's all the better for it. It really does help to look at manuscripts with a fresh eye, if it's after a couple of weeks or even a couple of years!

In addition to working on children’s books, both of you teach—Laura, you are a high school English teacher, and Craig, you teach illustration at local colleges. Do you feel that your experience as educators informs your work, and if so, how?

LEW: That is a tough question for me to answer. I write children's books because reading was so important to me as a child and I've never forgotten their magic, and I teach children because I want to give them some of that magic. Unfortunately, public high school is not all about reading fantastic books. It's often about state and mandated tests, working with kids who have absolutely no magic in their lives, and trying to show them that writing an essay has value. I've always been a huge proponent of reading for pleasure, and I've allowed that in my classrooms. Maybe my students don't write as many analytical essays as they should, but I think that more of them come away with a love of reading for fun, which will take them far beyond high school and college, and could even carry them through tough times—which is what reading has always done for me.

CO: I teach children's book illustration so I think critiquing students' illustrations has made me better at reviewing my own work for areas of improvement. It is also invigorating to me to share my work with my students and be inspired by their excitement for children's books.

Throughout the book, the cans Tim and Mr. Peters collect are referred to as soft drink cans. So what is it—soda or pop?

LEW: I guess it depends on where you live. In Connecticut it's definitely a soda, but when I lived in Ohio, I had to get used to everyone offering me a pop.

CO: As a west coaster I grew up saying soda!