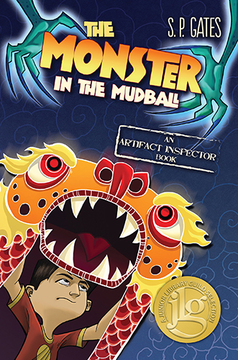 The Monster in the Mudball

For 20 years, an ancient child-stealing creature, Zilombo, has been dormant, kept safely imprisoned in her mudball. According to legend, as long as the mud stays dry, the beast will sleep. Now, however, the monster is loose–and hungry! After Zilombo snatches Jin Sparks’s baby brother, 11-year-old Jin joins Ancient Artifacts Inspector A. J. Zauyamakanda (Mizz Z for short) to help track the creature down. Unfortunately, the mud being has survived for millions of years and becomes stronger each time she revives. She has gained new abilities since Mizz Z last encountered her in Malawi two decades ago–a collapsible skeleton lets her squeeze into tight corners and she has a deadly electric shock like a stingray. [Jin] is a strong and courageous boy whose creative problem-solving skills will appeal to readers. Zilombo is caught between her predatory nature and a dawning humanity, and the conflict gives her an unusual depth. . . . An additional choice for monster fans.