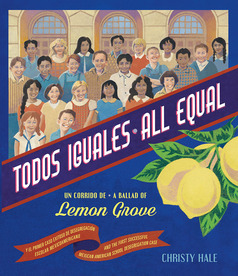 Hale’s storytelling shines in this account of Mexican American resistance against racism in the 1930s. Inspired by the Mexican and Chicanx oral tradition of corridos (folk ballads), Hale tells how the Mexican American community in Lemon Grove, California, organized a Neighbors Committee to bring a lawsuit against the school board—“the first successful school desegregation case.” The board secretly commissioned building an inferior “separate school” (“small, roughly built, and filled with cast-off school supplies”) to segregate Mexican American children. When it was finished, the students were barred from their previous school and told by the principal, “Move aside and let the Anglo students go to class…You don’t belong here.” Hale’s third-person text, in both Spanish and English (in separate text blocks on each page), is told from the perspective of twelve-year-old Roberto, who was selected to “represent all the children” in Roberto Álvarez v. the Board of Trustees of the Lemon Grove School District, a case that set the stage for future desegregation battles. Hale skillfully uses visual techniques—large halo shapes, split panels, and views from behind—to depict the unfolding events, while also drawing attention to aspects of everyday life in this small agricultural town. Sheet music for the “Ballad of Lemon Grove” begins the book and sets context, while photographs, notes, and a rich bibliography flesh out the back matter. Read alongside Tonatiuh’s Separate Is Never Equal (rev. 7/14) about Sylvia Mendez’s family’s successful fight, in 1947, for school desegregation in California.