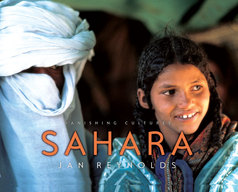 The peripatetic Reynolds, who has worked for National Geographic, traveled to two remote corners of the world for these perceptive profiles of the human equivalent of endangered species. Interestingly, the threat to the cultures of both the Sahara and the Himalayas is strikingly similar: trucks and airplanes are replacing the ancient trade routes traveled by these peoples and their animals (camels and yaks, respectively). . . . Reynolds’s sensitive photography captures the beauty of these harsh landscapes as well as the dignity and humanity of their peoples. Her books will be a welcome addition to the increasing roster—meeting an increased demand—of multicultural literature for children.

Children's Literature
The New York Times
Books Are My Thing