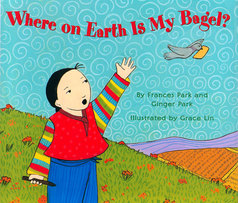 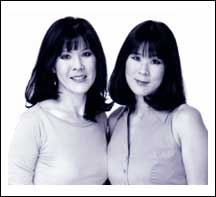 Ginger Park and Frances Park may be sisters, but they have surprisingly distinct personalities despite their shared love for books, bagels, and chocolate. Owners of a successful chocolate shop in the Washington, D.C. business district called Chocolate Chocolate ("so good, we had to say it twice!"), the sister’s first thought of the idea for Where On Earth is My Bagel?, when Frances Park, the elder of the two, was experiencing regular bagel cravings. Though it was a few years before the idea actually materialized into a manuscript centered on the endearing Yum Yung in rural Korea, the sesame seed had been planted from which would grow a whimsical and enchanting story celebrating the revered New York bagel.

The sisters, who see plenty of each other between running the shop and creating stories for both children and adults, have perfected their ability to collaborate on their work. Ginger works hard to conceptualize the manuscript ideas in a broad sense, while Frances hammers out dialog and wording. In the final phases, the manuscript goes back and forth between them, each one marking suggestions, changes, and deletions, without any actual verbal exchange. The result is as crisp and warm as Yum Yung’s bagel at the end of the story, and equally satisfying.

Ginger and Frances were born and raised in the D.C. area, where their parents landed after moving to the United States from Korea. They have always felt strong ties to their Korean roots. They were fortunate to have the opportunity to visit Korea often with their parents and were always kept up to date on the current political climate. Their father had been a famous Korean politician and leader of his day. It was not until their father passed away, however, that they began to research and unearth all that they had never known about his life. Working closely with their mother to find the missing pieces, the sisters were able to reconstruct a more complete picture of their father’s life and history, which they used to write TO SWIM ACROSS THE WORLD (Talk Miramax, 2000).

Attempting to celebrate their connection to Korea with their home in the United States, Frances Park and Ginger Park wove together strands of provincial Korea and modern U.S. culture to create Where On Earth is My Bagel?, a story to be enjoyed by bagel-lovers worldwide. The Park sisters are also co-authors of My Freedom Trip and The Royal Bee. They both live in the Washington, DC area.