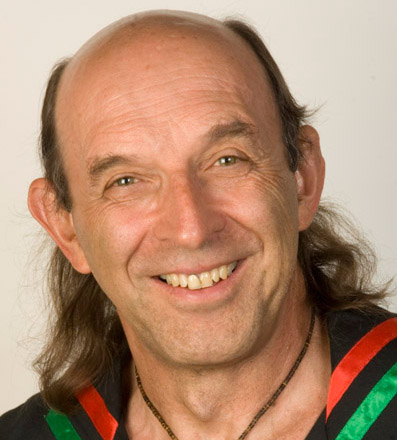 In Wolf Mark, teenager Luke King has to save his father from kidnappers as he discovers a family secret that will change his life forever. In this BookTalk, author Joseph Bruchac discusses the influence of legend on culture.

What inspired you to write a story like Wolf Mark?

Joseph Bruchac: I’ve been a reader of fantasy and science fiction since I was ten. It’s a genre I’ve always been fascinated by, not just in print but also in film, starting with such movie classics as Nosferatu, Dracula, and The Wolfman, which were the first major films to introduce vampires and werewolves to the broader public. I’ve read and seen hundreds of books and movies and consider myself extremely familiar with the genre. I’ve even taught courses in fantasy literature on the college level.

However, much as I’ve been entertained by past and present western culture treatments of werewolves and vampires in film and print, I’ve always felt that the American Indian perspective on shape shifters—or skin walkers as some of our traditions describe the phenomena—have either been ignored or misunderstood whenever an American Indian werewolf shows up in the writing or cinematic vision of a non-Native person. Further, the wolf itself—an animal that I know intimately from personal encounters with real wolves—is far from the ravening beast of European legend. Wolves are teachers and role models for Native people, not figures of fear.

So, when I decided to write a werewolf novel of my own, I decided to use a very different perspective than that of someone who sees the world only through European/Euro-American eyes. Plus, I also thought about how a real shape shifter who was in control of himself when in that second skin might be a formidable asset, even a force for good. This gave me the opportunity to bring in some of the other things I love—such as the martial arts that I’ve been studying and teaching for three decades, poetry (and there is a lot of poetry in the book, some of it woven in rather subtly), and spy stories. And I also saw it as an opportunity to tell an exciting story that I’d enjoy writing, one that could (I hoped) both entertain and teach a lesson, as do our traditional tales.

Legends are present in every culture, though they manifest differently. For you, what is the importance of passing on legend?

JB: I believe that legends last because they assist us in understanding ourselves—both the good and the bad in humanity, and our world, in all its beauty and its danger. They pass on timeless truths through memorable stories and clear language that is easy to remember. Our legends connect us to those who came before us and live on beyond us. Passing them on to our children is as vital as providing them with food and drink. Legends help us survive.

You often draw on your own Abenaki ancestry in your books. What are some differences in how you introduce cultural concepts in YA novels as opposed to your books for younger readers? Some similarities?

JB: I’d say that the major difference may be that when I write for older readers I can risk more, show a world that is more complex and potentially deadly than the aspects of that same world that you can find in my books for younger readers. It doesn’t mean that I shy away from the truth when I tell a story for first graders, but I know that they are not ready yet to hear certain things shown or told in certain ways. The same story can be told at different times, with more detail, as the listener grows older and is more experienced, more ready to accept and understand such things as personal mortality and moral ambiguity.

The skin walker legend is one that can easily be mixed up with mainstream ideas of werewolves. How did you avoid assumptions or take advantage of them to introduce the basis of the legend?

JB: Quite frankly, I’ve tried to play off of the sometimes corny mainstream images of werewolves (and, for that matter, vampires). I refer to them in the story—since my protagonist, a bit like me, is a student of lycanthropy—in order to provide a contrast to my main character’s experience and his own take on the American Indian POV. I’ve even included a few scenes—such as in the prerequisite deserted mansion—that are deliberately over the top, though leavened by humor. Yes, humor. I hope that my readers will find themselves laughing from time to time, even in the midst of some scenes that are meant to be tense or scary.

There are many other cultures at play in the story. What resources did you use to develop characters like Meena, who is Pakistani, and the Sunglass Mafia from Eastern Russia?

JB: I’ve always been fascinated with other cultures. I’ve not only traveled in Europe and studied European languages (and translated a bit of poetry from several of them), I also lived for three years in Africa. Since my years in college I have met and been friends with a number of Pakistani people and, quite frankly have been troubled by the narrow and even racist treatment in literature and in the media of those from that part of East Asia and of followers of Islam in general. I also am very interested in Russian literature and history and have been for decades. So, reading, research, travel, people I’ve met and learned from over the years helped me develop those characters to provide a backdrop of reality for the stage of my imagination.

The Sunglass Mafia provides some great comic relief, while also managing to be pretty threatening. How did the idea for this group come to you?

JB: Well, there was Rocky and Bullwinkle. (Thus we have Boris and Natasha.) I joke, I joke. I’m not sure exactly how they did come into the story. They just were there. But it is certainly true that over the last two decades more and more students from Eastern Europe and Russia have been attending American high schools and my characters are probably a bit influenced by some of the sophisticated Russian kids I’ve met in recent years. I also have always found the wry Russian sense of humor appealing—dark, at times, and with good reason. I guess you could say I once again decided to play with stereotypes—the ominous Soviet spy ala James Bond—while turning the convention on its head and introducing a more modern take on things. (Thinking of which, the Russian slang that I used is well documented, and among the Russian language books I kept by my desk was one of recent Russian slang.) And, yes, I also spent a lot of time surfing the web for up-to-date Russian jokes, pop music, slang, etc. There’s a lot on the Internet if you know where to look—and what not to believe.

The black ops side of Wolf Mark keeps readers on the edge of their seats! What do you find most challenging and most fun about writing espionage stories?

JB: I hope that people do find the black ops side of the novel both exciting and believable. I’m afraid I cannot divulge where I learned about some of this. If I did, I’d have to kill you. Kidding aside (if I am kidding), espionage stories only work for me if the threads are tied together, the characters believable and believably motivated. The great spy writer Eric Ambler was only of my earliest inspirations, well before Ian Fleming’s James Bond stories. Here, too, careful research and discussions with people who really do know, first hand, this material was very important to me. I also visited the very cool spy museum in Washington, D.C.

Do you have a favorite spy or superhero?

JB: My favorite characters in those genres are too many to mention. Instead, I’d like to credit their creators—the truly incredible Stan Lee of comic book fame, for one. And such novelists as the already mentioned Eric Ambler, Graham Greene, and Ross Thomas, all of them much better writers than I’ll ever be.

In the book, the Maxico corporation is working on some very sinister genetic engineering projects. Do you think with the technology we have today that something similar could ever happen in real life?

JB: When I was a student at Cornell University, I graduated with a major in English and a minor in Zoology. The natural sciences have always interested me and I’ve followed very closely the recent developments in such things as gene splicing. Plus being a science fiction buff, speculating on what might come of such things has been second nature for me for a long time. So, based on what I’ve learned and the potential that genetic engineering has shown, I think that is a real possibility for the sort of disturbing stuff in which my fictional corporation is engaged. Will it happen? I hope not. That’s one reason I chose to write about it.

Wolf Mark is one of the debut titles in the Tu Books imprint. Why do you think it’s important to bring diverse settings and characters to fantasy, science fiction, and mystery?

JB: Diversity is life. I believe that many aspects of the human existence are strengthened through diversity. And that is true in terms of literature and especially so when it comes to books for young adults. Bringing the sort of wide range of voices that has characterized Lee & Low (and made it such a dynamic force in publishing) to fantasy, SF, and mystery is, I think, a wonderful idea. One, in fact, that is overdue. The world in which we live is not a black and white one, but a rainbow. Tu Books, if it lives up to its promise, will be a literary reflection of that.

Can you tell us about any upcoming projects that you’re excited about?

JB: I’ve been working on several interesting projects. I try not to talk about what I’m writing—except with my editors and my writing group—until I have completed at least a first full draft. That said, one thing I can mention that is now in the revision stage is a novel that takes place in 1874, during the Red River War, when a coalition of plains tribes tried to stop the slaughter of the buffalo. It tells the story from the different points of view of a young Cheyenne Indian man and an African American member of the Tenth Cavalry, the Buffalo Soldiers. BROTHERS OF THE BUFFALO is the working title.