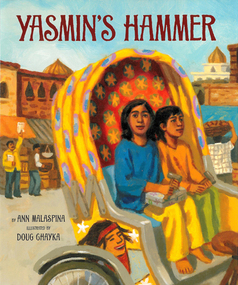 Yasmin's Hammer tells the story of a young girl in Bangladesh who works in a brickyard but longs to go to school. In this BookTalk, author Ann Malaspina and illustrator Doug Chayka talk about school, child labor, and the creation of Yasmin's Hammer.

Yasmin's Hammer is very grounded in the depiction of Bangladesh, and Dhaka in particular. How did you do your research?

Ann Malaspina: I went to South Asia several years ago when I was writing a book on Mahatma Gandhi. I was amazed at the beauty and also disturbed by the poverty, although the economies in the region are growing fast and opportunities are increasing every day. When I was there, I saw school-aged children at work in the cities and countryside, including a girl selling peacock feathers in a city park. When I wrote Yasmin's Hammer that girl was in my mind because she was the same age as Yasmin and had a huge, hopeful smile.

I researched the book by contacting organizations that fight child labor, reading about work and education in Bangladesh, researching the cyclones that flood the country every year, and contacting people who live in Dhaka. One man told me about the many crows in the city, so I added them to the story. He also described the frequent call to prayer from the many mosques. A young student helped me decide what clothes Yasmin and her sister would wear, and what sort of job the mother would have. Several people suggested that the two girls have a lunch of khichuri, a popular food in Bangladesh. I’m so grateful for the many people who helped me write Yasmin's Hammer.

Doug Chayka: Since I couldn’t visit Bangladesh to research the book, I relied on travel books and travel photos online. Yea Flickr and Picassa! I felt I was there after seeing all the great photos travelers posted on those sites. 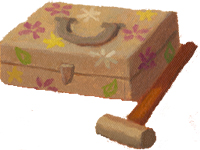 Yasmin and her sister desperately want to attend school. Where does Yasmin's attitude toward school come from? Did you enjoy school?

AM: Looking back, I’m pretty sure that I took my education for granted. I didn’t always enjoy getting up early to go to school or having lots of homework! I never imagined not being able to go to school because I had to help feed my family. When I wrote the story, I tried to imagine what Yasmin felt when she couldn’t read signs or newspapers, or when her mother said one day she could clean houses too. I tried to see the dream of education through her eyes.

DC: Yasmin and Mita appreciate school in a way I never did at that age! It wasn’t until I became a young adult that I understood what a privilege and gift it is to attend school, and to enjoy opportunities that come from an education. Now that I teach (illustration), I love school even more than I did as a student. I always want to continue to learn new things.

Ann, where did the idea for Yasmin's Hammer come from?

AM: My first book was about children's rights and included a chapter on rights in the workplace. The U.S. has labor laws prohibiting children from working. Even teenagers can't work at jobs that are too dangerous or for long hours. In developing countries, children continue to work to help support their families. Internationally, an estimated one hundred million young girls are involved in child labor, according to the International Labour Organization. A few years ago, I saw a BBC story about young brick chippers in Dhaka. I couldn’t put the story or pictures out of my mind. Not only were the children not in school, but the job is hazardous. The children kneel on the ground under the sun, breathing brick dust and wielding hammers. In my story, Mita hurts her hand with her hammer—and the girls cough from the dust. In fact, children work in brick yards in many developing countries.

Why is owning a book so important to Yasmin, even though she can't read it? 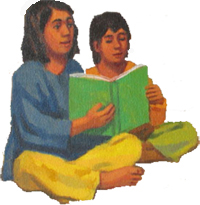 AM: As Yasmin rides to work in the morning, she sees a girl carrying a book bag on her way to school. Yasmin yearns to be like that girl and to have books too. Books symbolize possibilities beyond working in a brick yard. Even at night, Yasmin dreams of having books. In the story, the alphabet book that she buys inspires her whole family to change their lives.

Doug, can you tell us how you created the illustrations? What was your inspiration?

DC: I gathered photo research from countless sources to get an impression of life in Bangladesh. Then I began working on sketching in the scenes for each spread. I was inspired by the diverse textures and colors seen in Dhaka, and I also wanted to capture the bustle and density of city life there.

I hired two young models to photograph the characters just the way I wanted them, and pieced them into the settings. The paintings are oil on canvas.

The color and light in your art is very powerful. What do they convey about the story?

DC: I think (I hope!) the color and texture and light express the vibrancy of life in Dhaka and also the brightness and inner life of the characters. Despite their difficult condition, these girls are driven to take their future into their own hands. My intention was to let each element of the compositions play its part in making a unique color harmony for every page.

What does it feel like to see the finished book for the first time? 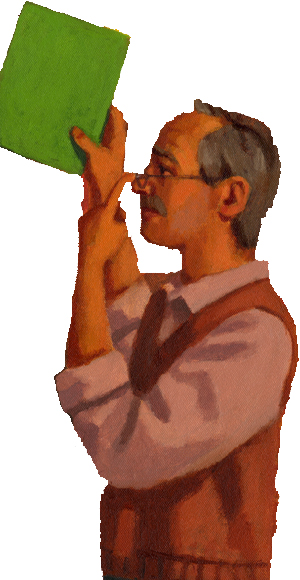 AM: It feels absolutely amazing. My wonderful editor made sure every word and phrase was the best it could be. I was astonished at how the artist Doug Chaka brought my story to life. He included so many small details of life in Dhaka. Looking at his illustrations, I feel like I’m stepping into the city, with the noisy traffic and smells of fruits and vegetables. My favorite spread is Yasmin’s family reading her book by candlelight.

DC: Because of the diversity of the settings, from rural to urban, and because we filled it with so much rich imagery to give a strong sense of place, Yasmin's Hammer was by far the most challenging book I've illustrated. It is so rewarding to see this book in print!

Child labor is a very serious topic for a picture book. Ann, why did you feel that this was an important story for a younger audience, and how did your intended audience affect how you approached the topic?

AM: I felt that young readers might be curious about the lives of child workers. They might want to know what it feels like to swing a hammer hour after hour. Even though Yasmin's life is hard, her family is close, and they respect and love one another a lot. Yasmin's and Mita's wages are helping keep the rice bag full and the roof repaired, which is pretty impressive! Yet their parents want the girls to have better lives. I made certain that the story's ending was optimistic.

What do you hope children learn from Yasmin's Hammer?

AM: I hope the story will inspire young readers to follow their dreams, and to reach out for help when they need it. Yasmin discovered she couldn't change her life by herself. She needed her parents, the bookstore owner, even her cranky boss who rewards her for working harder. I also hope Yasmin's Hammer sparks curiosity about Bangladesh. There is so much more to learn about that wonderful country—the arts and crafts, the history of how Bangladesh bravely won its independence, the poetry, and the tigers! Bangladesh is doing a lot to educate girls and young women, and to encourage them to be economically independent. Also, maybe readers will be inspired by Yasmin and Mita to try to end once and for all the terrible practice of child labor around the world.

DC: I hope children are able to feel through the paintings what life might be like in Dhaka for children their age, and come away with a new understanding of what makes their own life circumstances special or different.

What other resources would you recommend to parents and teachers introducing this topic to young readers for the first time?

AM: There are a lot of resources about child labor on the internet. Many organizations are working to get children out of the workplace and into schools. I mention a few of them in the back of the book, such as the United Nations Children's Fund (UNICEF) and Save the Children. There are also some wonderful children's books: Migrant Worker: A Boy from the Rio Grande Valley, by Diane Hoyt-Goldsmith; Iqbal by Francesco D'Adamo; Amelia's Road by Linda Jacobs Altman; Up Before Daybreak: Cotton and People in America, by Deborah Hopkinson; and Kids at Work: Lewis Hine and the Crusade against Child Labor, by Russell Freedman.