In the graphic novel Yummy, a fictional boy living in Chicago's Southside tries to make sense of the life and death of Yummy, a real-life boy caught up in gang life and killed by the very gang to which he belonged. Here, author G. Neri and illustrator Randy DuBurke talk about Yummy's story and about how they created their graphic novel.

Greg, when did you first decide to tell Yummy’s story? How did you initially envision this project?

G. Neri: Back in 1994 I was a filmmaker teaching workshops to kids in the inner-city schools of Los Angeles. When the Yummy story broke, a lot of discussions started popping up among the kids. Some felt Yummy was a straight-up thug who got what he deserved. Others felt he was a victim too. At the time, there was a gang war going on in the area and there had been several memorials for students who'd been killed. Many of the kids had siblings who were in gangs or had been affected by gangs. It was a loaded topic. 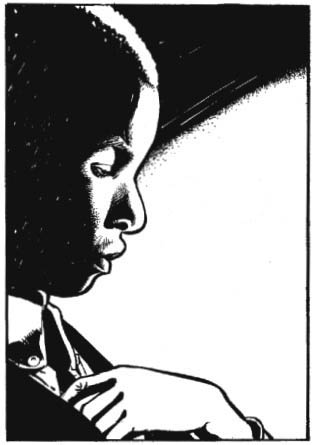 I couldn't get the story out of my head and started writing it with a film in mind. The script turned out great—powerful stuff. It was a finalist for the Sundance Film Labs which was a prestigious thing. But it turned out for me, it was too strong for the movies. I knew it’d be R rated and therefore wouldn't find the kids who needed to see this story. Above all else, I wanted it to appeal to young urban teens who might be dealing with gangs. I also wanted to show other kids who didn’t know about the reality of what was going on.

When and how did you figure out that this story should be told in graphic novel format?

GN: After leaving the idea of a film behind, I started playing with different mediums to tell the story, everything from radio to theater to new media. A friend was writing a graphic novel and when I read it, I saw that it was formatted like a movie script. Well, the two ideas clicked. Graphic novels are very cinematic but being like comics, they also appeal to kids. That’s what I read a lot of as a kid and I’d been a fan recently of some of the bold nonfiction storytelling in the format. Right then I knew a graphic novel was how the story should be told.

What would you say to those who might think Yummy’s story is too violent to share with young readers?

GN: Well, this may not be a story for everyone, but urban kids who deal with this kind of thing in their lives can definitely handle this at a young age—even some grade schoolers (but mostly middle school). For more suburban kids, especially white kids, they might be older but I think the story will enlighten them as to what is going on in this world that they may not know about. Issues with gangs may not be as black and white as they hear about. And I believe it will work well with high schoolers too.

GN: It was fairly quick for me in the beginning because I had already written a movie script and a picture book text for older kids, and I had lived with the story for almost a decade. So it was a matter of transforming the two into a new format, then growing it out. It was very organic and things just fell into place like it was meant to be. 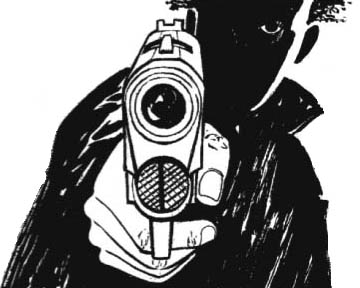 Afterward, I created a sort of shooting script as if for a movie: every panel described in detail, all the blocking, action and camera angles. The long part, of course, were the illustrations, and going back and forth with that. As a former illustrator, I wanted no part of creating all the illustrations the book would need.

Randy DuBurke: It starts off where I get the script from my editor. I read through it a few times to get the feel of the story. Then I start doing sketches as images appear in my head. The images may not be in the order the script is written but at this early stage it does not matter.

As I get more of a feel for the story I start to thumbnail more directly from the script—quick stick-figure sketches done to illustrate the action on a page. Once I’ve done the first pass over the entire script I will go back and start making little corrections until I’m at the final art board.

How is storytelling different in a graphic novel, as opposed to a movie or a more traditional book?

GN: A graphic novel is a blending of the three. It’s cinematic, like a movie, but it can wander and dip out of the main narrative, like a novel. As a comic, it’s not quite as threatening and visceral as a movie. You can take the story in chunks or fly though it, and it’s very easy to read and digest. Some of the great literary works of the last twenty years are graphic novels: books like Stitches, Safe Area Gorazde, Persepolis, and Fun Home. It’s a great form to use, but it is not always easy to pull off.

RD: There is no difference. You approach the mechanics of creating a book the same way. I illustrate the text and underlying emotion of the situation as best I can.

What research did you do?

GN: I read everything about the incident, lots of detailed daily reporting, in-depth coverage, court transcripts. I talked to experts on the gang and did my own personal research with gangs in Compton. I even went to Chicago to see all the points in the story myself, including the spot where Yummy died. However, I chose not to interview the families, as this is a story about perspectives and how everyone, from the media and the politicians, to everyday folks in Chicago and all over, viewed this kid and had their own preconceived notions of what was going on, based on their own issues.

What inspired the character of Roger, the narrator? Why is he important to your telling of Yummy's story?

GN: I realized early on that no matter how much research I did, there was no way I’d ever know what was really going on in Yummy's head. Everything would be speculation at best, or dishonest at worst. So I invented a narrator who'd basically be our eyes and ears as the events unfolded. He would question things, try to understand things, and feel things as they happened. I like the idea of a kid struggling to make sense of what was going down, trying to figure out all the madness in his own way.

RD: When I am doing a book that concerns true-to-life characters, I try to get as much photo reference as possible and then I practice drawing them until I feel comfortable.

With Yummy, I did not have the luxury of many photos of either Yummy or Shavon, so I wound up using my imagination to help fill in their likenesses. And as for Roger, he was pure imagination albeit inspired in part by friends' children.

What were some of the challenges of creating Yummy?

GN: The biggest challenge was working with another artist on this. I felt like I was the director and Randy was this great actor who could really bring something to it. But he was also like a director too. Many times he surprised me and many times he drew something that was different from what I thought should illustrate a scene. But in the end, it all came together.

RD: I hope I was able to give a sense of the world and environment Yummy lived in.

What do you want young readers to learn from Yummy?

GN: For any kids dealing with gangs or thinking about joining a gang, I just want to plant a seed of doubt, add another voice that says, “Think before you leap.” My telling some kids to stay out of gangs means nothing to them. But Yummy’s story is such a compelling wakeup call that I don’t have to say anything, or moralize on the issues. Readers can draw their own conclusions by seeing what happened to Yummy. There are no easy answers to be found, but hopefully the book will spark a lot of needed discussion.

RD: Yummy is a book about choices and consequences. I hope some kids who may be in a similar situation, or know someone who is, can read the book and because of it make the proper choices.

What is the most rewarding experience you’ve had with this book?

GN: The reactions of kids, teachers, and librarians have been fantastic. Even when I would talk about the story for a few minutes in classrooms over the years, the subject would immediately grab kids’ attention and Yummy’s story would take over the conversation. The students particularly couldn’t stop asking questions. And this was without reading the book!

RD: Working with my editor, Jennifer Fox, and art director, Christy Hale—two great women who helped to get this book done.

How did you feel when you saw the completed book for the first time?

GN: Frankly, after being focused on Yummy’s story for so long (since 1994!), by the time the book was finished, I was burned out on the story and had no objective viewpoint left. But when the positive reactions started coming in, starred reviews, and a lot of strong personal reactions, I saw everyone was feeling what I’d felt when I first started down this path so long ago. I could experience the power of the story again through fresh eyes. It’s nice closure to a long journey.

RD: I was happy to see the finished product. I think Lee & Low has done a wonderful job in presenting Yummy to the public.