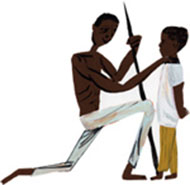 In today's ethnically diverse classrooms, it's "essential that books reflect students' cultural backgrounds," says Mary-Louise Newling, curriculum specialist for Alameda County's Multilingual/Multicultural Children's Literature Center. "It makes all the difference to have positive images of children's heritage. Sometimes teachers will say, 'We're doing a unit on slavery now, and my African American students aren't interested.' If that's the only image of African American people used in the classroom, children feel singled out and upset," says Newling. "You need to reflect the realities of the children in your class and expose them to other people's experiences. It has to be done respectfully."

Recently, more materials have become available to "speak to the multiplicity of experience," says Newling. "It's more important to have many choices representing a group's experiences. There is no generic Mexican American or African American…"

Newling suggests that people choose children's books based on guidelines from Ten Quick Ways to Analyze Children's Books for Racism and Sexism, from The Council on Interracial Books for Children, and How to Tell the Difference, by Beverly Slapin and Doris Searle. Important points include:

General Accuracy
Books should contain current, correct information. Consider how old the photos and pictures are. Modern stories should acknokwledge recent events. For example, a book about South Africa should reflect chages in the apartheid system. While considering students' ages, stories should not force artificially happy endings.

Stereotypes
Beware of reinforcing stereotypes. Books should reflect individual people's lives, rather than assigning general personality traits or behaviors to an entire group of people. Writers should weave information about a culture into the flow of a story. A misleading book might discuss "the Mexican American experience" without considering the variety of experiences within a group. Workbooks particularly present a danger of caricaturing members of a culture, Newling says. Also, consider who holds powerful positions. Who has problems? Who solves problems? Men and people of European descent should not provide all the solutions. What types of roles do girls, women, and people of color have?

Language
Be careful of books that separate charcaters into two groups: those who speak standard English and those who don't. This division can reinforce stereotypes that all people in a group speak in a particular way. If a book includes the language of a specific culture, the actual language should appear, not nonsense words or an invented language that mimics the authentic one. Translated works should convey the original content and not sound like awkward, word-by-word interpretations.

Epithets
Some books may contain epithets insulting people of a particular race oe ethnicity. "There's a thin line between censorship and protecting children from what is really going to hurt them," Newling says. "I would tend to err on the side of protecting children."

Illustrations
Illustrations should convey the reality that members of any ethnic group look different from one another. The pictures in a common version of The Five Chinese Brothers are "downright insulting," says Newling. "They're caricatures—all depicted to look alike. It's demeaning to Chinese people." With photographs, captions should indicate a specific location and situation, not a general statement like, "In Africa…"

Author's Perspective
Newling describes this as a controversial point. Some people believe that writers should belong to the cultures they describe; others believe that it's enough if writers empathize with members of a culture even though writing from from an outsider's point of view. Writers should avoid treating cultural practices as exotic.

Appealing Stories
To receive feedback, Newling lends books to teachers and asks for students' reactions. Themes like friendship, family, and school appeal to children within and outside of a given culture, she says.

Tough Issues
In handling difficult topics, authors should present the complexity of issues and offer multiple perspectives. Michael Lacapa's picture book, Less Than Half, More Than Whole, does a good job portraying biracial issues, newling says. "The book deals with a child's real confusion about being neitheer all white nor all Native American. There's no 'pie in the sky' resolution."