One of my favorite parts of being a writer is doing research. On my latest picture book, Around the World, I was fortunate to combine two of my loves, basketball and travel. Around the World is a story about international basketball, and last summer I traveled to Paris to do some research. On a previous visit, I had watched players on a green court near the Eiffel Tower. I returned to this court with the idea of taking some pictures for the illustrators. 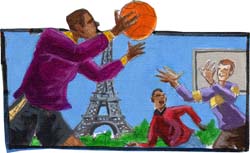 On a warm July afternoon, I approached an official at the desk at the Centre Sportif Emile Anthoine.

“Excusez-moi,” I began in my poor French. I explained I was a writer and asked permission to photograph the basketball court.

“Non. Ce n’est pas possible.” The official gave no doubt to the impossibility of this. I needed permission from the mayor in order to take a picture. Having read in Adam Gopnik’s Paris to the Moon about the futility of arguing with French bureaucrats, I quietly asked for the mayor’s phone number. What chance was there of getting the mayor of Paris to give me permission to take one photograph of a basketball court and how long would that take?

“You want to play?” a basketball player joined our discussion and spoke English.

“I just wanted to take a picture of the court.”

Outside, the setting was spectacular. On a soccer field, a fast-paced game was being played with the Eiffel Tower as a backdrop. At the basketball court, players were warming up wearing the baggy shorts, T-shirts, and basketball shoes familiar to any hoopster.

I struck up a conversation with Carlos from Columbia in a combination of French and English. He described how everything in France was “tout football,” all soccer, but he loved basketball. He told me about the first time he played. “I felt like I was flying.”

“Moi aussi.” That’s exactly how I felt the first time I played in the Manz School gym in Wisconsin. Like flying. That’s the reason I love this game.

I asked Carlos about his favorite players. Tracy McGrady, Jayson Williams, Magic Johnson, and Michael Jordan were pronounced with a French accent. I asked about Tony Parker from France, who’s a favorite player of mine. “No, not enough style.”

I suggested it might be because of the coach he played for, rather than Tony Parker’s natural inclanations.

“Could be. Could be.” Carlos said as we broke up in teams.

As an American playing in France I quickly realized differences in the game. My French teammates were much more inclined to share the ball. On a give and go, the ball always came back to the guy cutting for the hoop even if he wasn’t open. There was much more passing of the ball and less of the one on one—me against the world—that’s so common in the States. Fouls were called on much lighter touch than I was used to. But like at home, style was very important. A stylish move was appreciated whether the ball went in the hoop or not.

As I shot a turnaround in the left corner, I thought what a wonderful gift to the world this game of basketball has been. What a wonderful gift for me to travel to new places and play a game, familiar, yet different, and experience the local variations of rhythm and flow. How wonderful to be a participant, not a tourist.

We played game after game and I had time for one more. On a drive to the hoop, my left foot landed on the ankle of my defender and rolled over. I grabbed it. I knew I was finished. I raised my hand and said, “I’m done.” I limped to the side as a number of guys asked if I was okay.

I sat looking at the court and the Eiffel Tower behind a row of apartments on a beautiful summer day. “Yeah, I’m okay.” A small price to pay for basketball in Paris.

In addition to France and the United States, Around the World contains scenes set in China, Australia, Serbia, Turkey, Nigeria, Brazil, Canada, and Puerto Rico.