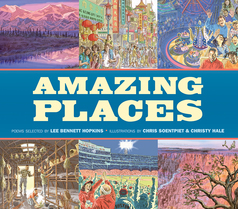 In this companion to 2010’s Amazing Faces, 14 poems celebrate landmarks and attractions across the United States, such as the Grand Canyon, Fenway Park, and San Francisco’s Chinatown. In the tender opening poem from Janet S. Wong, a girl treasures a night camping with her mother in Alaska’s Denali National Park: “When the fire is spitting ready,/ she reaches/ in the bag, rustling,/ and hands me/ one big, fat, luscious/ marshmallow.” Joan Bransfield Graham’s concrete poem, “Sandy Hook Lighthouse,” is both written from the lighthouse’s perspective and shaped like one: “Wild/ storms rage,/ lightning crackles,/ nothing/ deters me./ I have/ stood on/ duty in this/ place for/ more than two/ centuries.” The far-ranging locations and multicultural, multigenerational cast help create a broadly appealing testament to the American landscape and people.