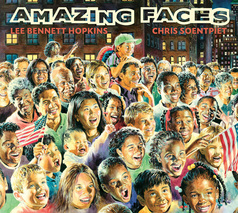 The focus of this excellent collection of disparate poems is not strictly faces but people. The poems–contributed by writers such as Joseph Bruchac, Nikki Grimes, Pat Mora, and Jane Yolen–include character sketches, vignettes, and descriptions of people from all over multicultural America. Soentpiet’s (Saturdays and Teacakes) astonishing watercolors unify the book’s theme as he concentrates each illustration on the faces of Americans who live in both small towns and cities. His paintings are lifelike, full of shadows and depth, and astonishingly precise. They allow readers to see a variety of emotional scenes, featuring a Native American storyteller, a soldier returning home, an insouciant Mexican-American girl, a firefighter, flirting teenagers, and a busy street in Chinatown. Especially noteworthy is Rebecca Kai Dotlich’s opening poem, “Amazing Face,” a touching portrait of a parent’s hopes for a new baby (“Amazing, your face./ It shows you will watch from a window,/ whisper to a friend,/ ride a carousel…”). The ending reveals a sea of faces and fireworks to accompany Langston Hughes’s “My People,” a fitting celebration of Americans in all their diversity.