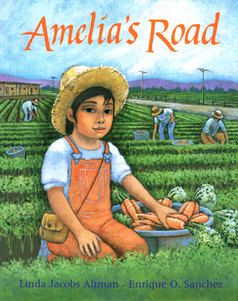 Synopsis
Amelia Luisa Martinez hates roads. Los caminos, the roads, take her migrant worker family to fields where they labor all day, to schools where no one knows Amelia's name, and to bleak cabins that are not homes. She longs for the day when she doesn't need to move again, and can live in a tidy white house with a fine shade tree.

Background
There are between three million and five million migrant workers in America. They move from one harvest to another and do not have stable homes. Many of the migrant workers come from different parts of the world, such as Mexico, South America, or the Caribbean. But many of them are American citizens, born in the United States.

Some of the male workers travel by themselves and return to their families after the harvest. Others travel with their families. Out of necessity, even their children work in the fields.

Prereading Focus Questions
Before students read the story, you might want them to answer one of the following questions as a motivation for reading.

Reader's Response Journals
To promote active reading, you might wish to have students keep a reader's response journal as they read the story. The journal will help students to personalize what they are reading. Tell students to write their reactions to the people and events in the story.

Have them keep these questions in mind as they read:

Cooperative Learning
Divide the students who have read Amelia's Road into groups of four. Remind students that children like Amelia often do not spend more than a month or two at a new school before they move to the next harvest with their families. For this reason they are always the "new" student in a class.

Use the Roundtable structure to have students generate ideas for making such a student feel at home right away in the new classroom. In Roundtable, students in a group take turns adding information to the group's response to a prompt. Each student writes in turn, and the students work until all their ideas have been recorded.

Tell students to think of ways to let the new student know everyone's name (in addition to using name tags). Have students think of ideas for helping the new student learn the material that the class has already covered. Ask them to think of a parting gift for such a student that would help the child remember the school.

Hand each group of students a large sheet of paper with the column headings LEARNING NAMES, LEARNING SCHOOLWORK, and GOING-AWAY GIFT printed at the top. Tell students to pass the paper around the group, allowing each student to contribute his or her ideas in each column. To be sure that all students have contributed, you might want students to use pencils of different colors or to initial their work.

When the groups have had sufficient time to complete the exercise, ask them to share their charts with the other groups. You might wish them to combine the charts to create a class booklet on welcoming new students to the school.

Interdisciplinary Activities
In order to integrate students' reading experiences with other subject areas, you might want to have students complete one or more of these activities. Students can choose to write one of the following:

Amelia's Road is about migrant farm workers. Have students find out who Cesar Chavez was and why he became a hero to many migrant workers. Tell students to write a brief profile of Chavez. Ask for a volunteer to share the information with the class.
The diagrams should include information such as the following:

About the Author and Illustrators
Linda Jacobs Altman is a writer based in Clearlake, California. Amelia's Road marked her picture book debut. This title carries special meaning for her: “I first became aware of the problems of migrant farm workers when Cesar Chavez was organizing the United Farm Workers in the 1960s. I identified especially with the migrant children because, like them, I grew up in a family where moving around was simply the way of things." She was born in Winston-Salem, North Carolina, and has lived in many parts of California. Her second book for Lee & Low, The Legend Of Freedom Hill is a fictional story set during the California Gold Rush, in which a girl teams up with her best friend, in search of gold to buy her mother’s freedom from a slave catcher.

Enrique O. Sanchez divides his home between Bar Harbor, Maine and Florida. He was born in the Dominican Republic and studied architecture at the Santa Domingo University and fine arts at the Bellas Artes Institute. He then moved to New York to study set and scene design and worked as a graphic designer for Sesame Street. While he is primarily a fine artist, he has illustrated many picture books (see below for full list). 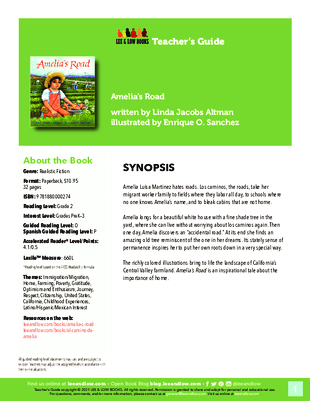