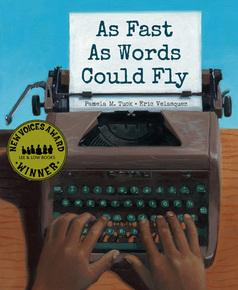 As Fast As Words Could Fly

Tuck’s story, based on her father’s personal experiences with school segregation in 1960s North Carolina, won Lee & Low’s New Voices award in 2007, resulting in this picture book, illustrated in dramatic oil paintings by Velasquez (The Price of Freedom: How One Town Stood Up to Slavery). Mason Steele helps his father’s civil rights efforts by writing letters for him; when the Steeles get a manual typewriter, Mason shows a gift for typing quickly and accurately. After a court case wins Mason and his brothers the right to attend a local high school, they are met with distrust and outright hostility at every turn. Against the odds, Mason’s typing skills earn him the chance to represent the school at a typing competition, but his record-setting victory there is tinged by prejudice: “Not a single person in the audience clapped. Mason received nothing.” Tuck lays bare the challenges that faced Mason and black students like him, but she also tempers the story’s cold realities with moments of hope, echoed by the pride and determination visible in scenes of Mason and his family.