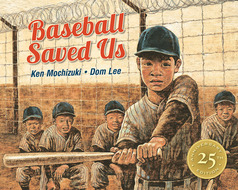 Synopsis
Shorty and his family, along with thousands of Japanese Americans, are sent to an internment camp after the attack on Pearl Harbor. Fighting the heat and dust of the desert, Shorty and his father decide to build a baseball diamond and form a league in order to boost the spirits of the internees. Shorty quickly learns that he is playing not only to win, but to gain dignity and self respect as well. Baseball Saved Us will appeal again and again to readers who enjoy cheering for the underdog.

Background
In 1942, two months after Japan attacked Pearl Harbor in Hawaii on December 7, 1941, President Franklin D. Roosevelt signed Executive Order 9066, which incarcerated people of Japanese descent in internment camps. The reason, according to the government, was because it could not tell who might be loyal to Japan. The United States was at war with Germany and Italy at the time, but the order did not apply to German Americans and Italian Americans.

Approximately 120,000 Japanese-Americans–nearly two-thirds of them American citizens by birth–were first sent to temporary assembly centers (most of which were located at fairgrounds and racetracks) and then to 10 major concentration camps in six western states and Arkansas.

None of the internees was ever proven to be dangerous to America during World War II. In 1988, the United States government admitted that what it had done was wrong.

Before Reading
Prereading Focus Questions
Before students read the story, you might want them to discuss one of the following questions as a motivation for reading.

Setting a Purpose for Reading
Have students examine the cover of the book, the title, and the first few pages of Baseball Saved Us. Then ask them to brainstorm what they think the book will be about. Have students create a chart listing what they think will happen in the story and what questions they hope will be answered by the story's end.

After students have finished reading the story, or have had the story read aloud to them, suggest that they complete their charts. You may wish to have them use the charts as a basis for a written response to the book.

During Reading
Reader's Response Journals
To promote active reading, you might wish to have students keep a reader's response journal as they read the story. The journal will help students personalize what they are reading. Ask students to write their reactions to the people and events in the story. What kind of person is Shorty? Why does Teddy refuse to get his father a cup of water? What does this incident tell about life in the Camp? What effect does life in the Camp have on Shorty? Do you identify with Shorty's struggles? Why or why not?

Be sure to remind students to save their work in their writing portfolios.

ASSESSMENT
You might have students assess what they wrote in their reader's response journals by asking them to respond to the following questions:

–What details did you give to explain what Shorty was like?

–What could you tell about life in the Camp? How did being in the Camp make people feel and act?

You might want to make sure that students understand the task. However, do not grade journals for grammar, mechanics, or writing structure, since journal writing is, of its nature, informal and personal writing.

About the Author and Illustrators
Ken Mochizuki is a novelist, journalist, and an actor. A native of Seattle, Washington, he received his bachelor's degree from the University of Washington. His parents were sent to the Minidoka internment camp in Idaho. He got his inspiration for Baseball Saved Us reading a magazine article about an Issei (first generation Japanese American) man who built a baseball diamond and formed a league within the camps.

Dom Lee is a native of Seoul, South Korea. He received his bachelor's degree in fine arts from Seoul National University and his master's degree from the School of Visual Arts in New York City. He lives in New Jersey. The illustrations for Baseball Saved Us were rendered by applying encaustic beeswax on paper, then scratching out images, and finally adding oil paint for color. Some of Dom's illustrations were inspired by photographs taken by Ansel Adams in 1943, from the Library of Congress collection.

Ken and Dom have also worked together on the award-winning titles, Heroes and Passage to Freedom: The Sugihara Story, and Be Water, My Friend: The Early Years of Bruce Lee – all published by Lee & Low Books. Also to Dom Lee’s credit is Journey Home, which he illustrated with his wife, Keunhee Lee.

Journey to Topaz by Yoshiko Uchida

The Journey by Sheila Hamanaka

About Japan
The Bicycle Man by Allen Say

Other books of Interest
Anne Frank: Beyond the Diaries: A Photographic Remembrance by Rian Verhoeven