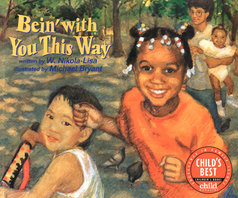 Bein' with You This Way

Synopsis A playground rap that introduces young readers to how people are different and yet the same.

Background According to author W. Nikola-Lisa, Bein’ With You This Way is a “celebration of how all of us, no matter our racial, gender, or cultural background, have the capacity to share in the beauties of life.” The genesis of this book came about while he was attending the National Council for Teachers of English (NCTE) conference in Atlanta. He said, “I started writing the book because I got a certain beat in my head, and then an idea. After drinking three milkshakes at a hotel restaurant, I had the basic draft of the story down.”

There were several other points of origin to the book. First, it is a traditional concept book that draws on the nature of opposites. It is also lodged in the folk tradition, especially jump-rope and counting rhymes. Another area of influence is poetry, in the use of compressed lines, stark images, and a heightened sense of language. Finally, the book is influenced by music. In fact, the author originally considered developing a musical score to accompany the text, but ultimately decided against it.

Before Reading Prereading Focus Questions Before reading the story to the students, you might want to involve the children in activities related to similarities and differences.

Ask two volunteers to stand in front of the class. Ask the class to suggest how these two people look the same (e.g., hair color, clothes) and how they look different.

Ask one volunteer to name some games he or she likes to play. Ask second volunteer if he or she likes the same games, or some different games. Then pair students and have them discuss how they look the same or different. Have students ask each other what they like to eat, favorite subject in school, family members, etc.

After the students have had the story read aloud to them, ask them if the story answered their questions.

During Reading Reading the Text Ask students if they have heard of rap. Explain that rap is like a poem and is read with rhythm. (It is suggested that teachers practice reading orally through the book before reading it to the class.) Read with expression and rhythm without interruption. Students may join in at the refrains.

AFTER READING Responding to the Text

Cooperative Learning After students have listened to or read the story, form them into groups of four. Tell students that they are to work together to make a picture of someone they would like as a friend. Use the Roundtable structure, which asks students to take turns contributing details in responding to a prompt.

Give each group one large sheet of paper with the outline of a person’s head drawn on it. Provide the group with some crayons. Explain that they are to draw a picture – only one picture – of someone they would like as a friend. Each student in the group will have a turn to add a detail to the picture. The first student might draw the eyes, the second student the hair, and so forth.

Tell students that they will have to take a vote among themselves whether the person is a boy or a girl. (You might want to choose one group to model the voting procedure for the class.)

When the groups have finished their pictures, display them in the classroom. You might use the pictures as the basis for a social studies lesson on people in a community.

Interdisciplinary Activities In order to integrate students’ reading experiences with other subject areas, you might want to have students complete some of these activities.

Ask for student volunteers to “sing” portions of the book in “rap” style. You might wish to set up a group to perform the book. Some students might perform the solo sections. Others might work as a chorus to perform the repeated words, such as “How perfectly/ remarkably/ strange.”

About the Author and Illustrators

W. Nikola-Lisa Other titles by the author Include America: My Land, Your Land Our Land, The Holes In The Road, No Babies Sleep, Storm, Night Is Coming, and 1,2,3 Thanksgiving. He was awarded the Ezra Jack Keats Fellowship in 1990 and is an associate professor of education at National-Louis University in Evanston, IL. He received his bachelor’s and master’s degrees at the University of Florida and his doctorate in education from Montana State University. He lives in Chicago with his wife and their two daughters.

Michael Bryant Other picture books by the illustrator include ,Our People, Goodbye Hello, and The Story Of Nat Love. He received his bachelor’s degree in fine arts from Kean College and was the winner of the University of Wisconsin Multicultural Mirror Fellowship in 1991. One of his favorite paintings in the book, done in watercolor and color pencil, shows children playing on a swing set. “When I first saw the kids swinging up and down, their faces full of joy and innocence, I thought it would make a perfect image for a picture book. I’m so glad that Bein’ With You This Way gave me a chance to share that moment with readers.” He lives in Pennsylvania with his wife and their two daughters.