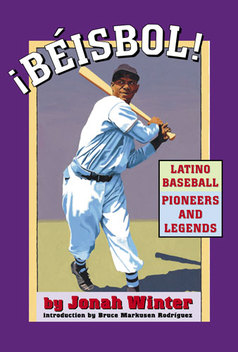 Synopsis
This book is a series of “baseball card” portraits and profiles focusing on 14 remarkable Latin American players who were trailblazers in opening the game to Latinos in the major leagues of the United States. These players were all active in part between 1900 and the 1960s. They came from places where baseball was (and still is) wildly popular—Cuba, Puerto Rico, Venezuela, the Dominican Republic, and Mexico. Readers learn about players ranging from José Méndez, the great Cuban pitcher who was secretly hired to coach in the United States, and Martín Dihigo, the only player ever elected to the Hall of Fame in four countries, to Roberto Clemente, the legendary Puerto Rican outfielder, and Felipe Alou, the first full-time Dominican star in the major leagues. The book includes an introduction by Bruce Markusen Rodríguez, Manager of Program Presentations at the National Baseball Hall of Fame and Museum in Cooperstown, New York.

Background
Today, major league baseball in the United States is populated, indeed some would say dominated, by Latin American players. Latinos such as Sammy Sosa, Alex Rodriquez, Bernie Williams, Carlos Delgado, Manny Ramirez, Wilson Alvarez, Pedro Martínez, Orlando Hernández, and Javier Vazquez, to name just a few, bring delight to fans all over the country with their amazing skills. In many impoverished towns in the countries of Latin America, baseball is the game of choice. Youngsters sometimes play with broomsticks or tree branches for bats and with fruit or rolled up socks for balls. For a few exceptional young men, baseball is a ticket out; they are invited to join a professional team in the United States. More than forty Latino players have become millionaires from the salaries they earn playing major league ball in the U.S.

However, the story of Latin American baseball players in the United States was not always so successful. Many of the first Latino players had to overcome numerous obstacles. Most of these players faced a language barrier. Dark-skinned players were often the victims of racism, and like blacks, they were treated as second-class citizens. As a result, some of the best early Latino players never made it to the major leagues. Instead, they played in the Negro Leagues in the U.S. or in winter leagues in Latin America.

Before Reading
Prereading Focus Questions
Before introducing the book, share the background information with students. Then you may wish to set the stage for reading with questions such as the following.

Exploring the Book
Display the front cover of the book and write title on the chalk board, including the subtitle. Read the title aloud for students. Ask them why they think the first part of the title is in Spanish.

Point out that this book is nonfiction. Call on volunteers to explain the difference between fiction and nonfiction.

Setting a Purpose for Reading
Ask students to read to find the answers to these questions:

Vocabulary
This book contains many words that have a special meaning in baseball. They include:

Challenge students to do one or more of the following:

Reading and Responding
Discussion Questions
After students have read the book, use these or similar questions to help guide their understanding of the book. Encourage students to refer to passages in the book to support their responses.

Sports
Students might research and compile short biographies of contemporary Latino ballplayers to share with the class. These biographies could also be illustrated with drawings or pictures from magazines or newspapers, and then put together in book form to create a companion volume for ¡Béisbol!

Language Arts
Read aloud the famous poem, “Casey at the Bat: A Ballad of the Republic, Sung in the Year 1888” by Ernest Lawrence Thayer. Students may enjoy learning and reciting the poem at a group. There are several illustrated picture book versions of the poem available. It can also be found at: Poem of the Week.

About the Author/Illustrator
Jonah Winter is a longtime baseball enthusiast, and his love of the game inspired him to write this book as well as Fair Ball!: 14 Great Stars from Baseball’s Negro Leagues and Roberto Clemente: Pride Of The Pittsburgh Pirates. Winter, who began his literary experiences as an editorial assistant and then an editor in publishing, was influenced in his career as an author of picture books by his mother, a children’s book illustrator, and his father, a painter. Winter graduated from Oberlin College and has an MFA in Creative Writing from the University of Virginia. He lives with his family in Pittsburgh, Pennsylvania.

¡Béisbol! has been honored as a “Choices,” selection and one of “40 Books About Sports for 2003” by the Cooperative Children's Book Center. It is also listed on the Pennsylvania Young Reader's Choice Award Masterlist, sponsored by the Pennsylvania School Librarians Association. Winter’s other children’s books include Diego, Frida, and Once Upon A Time In Chicago: The Story Of Benny Goodman. He has also written volumes of poetry for adults and is the recipient of the 2000 Pushcart Prize for poetry.