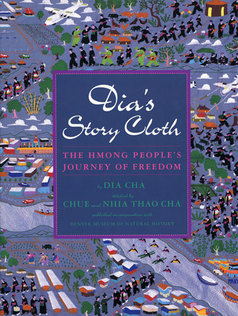 By Dia, Chue, and Nhia Thao Cha
Illustrations by

Dia Cha's story is shared by many Hmong Americans who made a long journey to freedom. As told through the story cloth stitched by her aunt and uncle, the Hmong people's search for freedom began long ago in China and continued as they settled in Southeast Asia. With the onset of the Vietnam War, many Hmong, who fought with the Americans, were forced from their villages in the highlands of Laos. After the war, they embarked on the dangerous flight to refugee camps in Thailand. Many families spent years in the camps before eventual resettlement abroad.

For centuries needlework has been part of Hmong culture. But it has only been within the last two decades that "story cloths" emerged as a way for the Hmong to keep their stories alive.

For the Hmong people, story cloths are a bridge between past and present. For all Americans, Dia's Story Cloth is a universal story of the search for freedom.

Background
Dia Cha and her family's escape to the United States is a story that is shared by many Hmong Americans. The name "Hmong" (Pronounced "Mong") translates as "Free People."

In 1976, under the auspices of world relief organizations, the first Hmong refugee families came from Laos and Thailand to the United States. The Hmong had been known throughout Southeast Asia for their exquisite needlework. Soon after arriving in the United States, their "flower cloth," or pa'ndau (pronounced "pan-dow") began to appear at local community fairs. This striking needlework soon came to distinguish the approximately 125,000 Hmong Americans.

For 100 years the Hmong grew crops, raised pigs and chickens, stitched flower cloth tales, and lived a family-centered existence in their remote villages. But the peace was shattered in the late 1950s when the Hmong were forced to take sides in the guerrilla warfare in Laos. Some Hmong sided with the Royal Laos government backed by the United States, with other Hmong sided with the Communist Pathert Lao nationalists supported by North Vietnamese and the Soviet Union. General Vang Pao led a Hmong army financed and trained by the American Central Intelligence Agency. In this "secret war" in Laos, thousands of Hmong men and boys were recruited by the CIA to help with rescue missions and other guerrilla operations. Hmong families were forced to hide in the jungle as the Pathet Lao invaded their villages from the ground while the CIA bombed their villages from the air. About 40,000 Lao Hmong lost their lives in the fighting.

In 1975, when the Royal Lao government fell and the United States withdrew from its northern Laos airfield command center, the Hmong allies were left in a desperate situation–some say they were abandoned to the killing fields of the Pathet Lao. Thousand of displaced survivors made their way to the Mekong River and hazarded the dangerous crossing by raft or floats to refuge in Thailand. Detained in refugee camps maintained by the United Nations High Commission for Refugees, the people lived minimally in multi-family, barracks-like buildings.

The people tried to live normally in the camps in Thailand. Time was heavy and many stories were told–of the "origins of the Free People," of better days in the mountain villages, and of recent trauma and flight. Fortunately, their strong narrative tradition and artistic needlework skill found new means of expression. Drawn by men and embroidered by women to document Hmong legends, lifeways, and experiences, story cloths are both family heirlooms and collectible folk art.

Dia's Story Cloth is an outstanding example of this new textile art form. A double bed-sized piece of gray commercial cotton cloth is the foundation. On it, Dia's uncle, Nhia Thao Chia, drew figures and scenes of Hmong history, life, and war, and the escape. His wife Chue used chain, feather, satin, and cross stitches to render the hundreds of animals, plants, people, houses, and events. Their stories grew to fill the cloth and document the Hmong journey.

Using the KWL (what we Know, what we Want to know, and what we Learned) strategy, the teacher can help scaffold students' prior knowledge, formulate guided reading questions, and synthesize what was learned from reading the story. Using the chart below, record students' brainstorm on what they know about the story under the first column of "What we Know." Elicit from students questions they have about the story e.g. Who are the Hmong people? Where did they come from? Why did they leave for freedom ? Where did they go to? What was their journey like? Record their questions under the second column in the chart , "What we Want to know." After reading the story, record students' response to their own questions under the third column, "What we Learned."

Supportive Activities for English Language Learners and At Risk Students:

About the Author and the Story Cloth
Dia Cha was born in Laos. In 1975 she fled with her family to Thailand, where they spent over four years in the Ban Vinai refugee camp before gaining entry to the United States. Although she didn't start school until she was 15 years old, in 1992 she became one of the first Hmong American women to earn an advanced degree: a master's in applied anthropology from Northern Arizona University. She works as a cultural anthropologist in Boulder, Colorado, and is co-author of Folk Stories of the Hmong, Dia's Story Cloth is her first book for young readers.

Dia's aunt and uncle, Chue and Nhia Thao Cha, made this story cloth in 1990 in the Chiang Kham refugee camp in Thailand. They have since returned to Laos.