You met Arthur Ashe a couple of times as a child. Now, years later, you have written a biography of him as your third picture book. How did you decide that it was time to write about Arthur Ashe? Did you have any recent inspiration?

I wrote the manuscript for the Arthur Ashe book in 2007, at the prompting of Jennifer Fox, my editor at Lee & Low Books. When she mentioned it, I sent her a flurry of excited e-mails relating the two times I'd met Mr. Ashe when I was a child, and giving her a rundown of all of his athletic, literary, and humanitarian accomplishments. Typically, I choose to write about lesser-known sports figures, but I have a particular fondness for Mr. Ashe since our paths had crossed.

What about Arthur Ashe's story impresses you most? 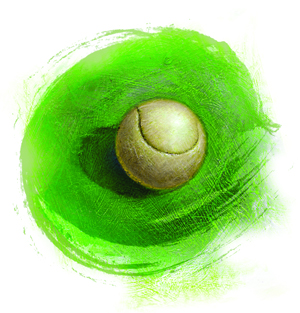 I am most impressed by Mr. Ashe's efforts to focus the world's eyes on Apartheid. Through sports, he managed to bring attention to South Africa's policy of racial segregation, and he was the first major sports figure to do so. Having grown up in segregated Richmond, Virginia, one would think that Mr. Ashe would have confronted Apartheid with anger, but he didn’t. A combination of intellect, tenacity, compassion, and fearlessness fueled his crusade. At the beginning, he was a one-man silent storm, and his approach worked. He drew others to his cause without fire and righteousness, but with reason and hope.

What was a story or fact that didn’t make it into the final book?

There are so many! The first version of the manuscript I submitted was so long! I wanted to share everything about Mr. Ashe. If I'd had the space, I would have included more information about Mr. Ashe’s ancestry, which can be traced back to the 1700s. Mr. Ashe had slave ancestors who had likely been owned by Governor Samuel Ashe of Virginia. I'd have included Mr. Ashe's military service, particularly the time he spent coaching at West Point. I also would have included more information about the time he spent as captain of the Davis Cup team, when Jimmy Connors and John McEnroe weren’t always on their best behavior.

What makes sports so compelling to you?

I write about people in all fields, but sports is compelling to me because it is something in which most people can find something to relate to. Teamwork, hard work, determination, adversity—all these are elements of sports, and they are also things that children in school and adults in the workplace encounter and have to deal with. The athletes I've written about are all people who managed to achieve their goals even though they started from nothing or very little. Sports was their occupation, but their journeys were universal.

Arthur Ashe was an activist off the courts. Does that make his story more interesting to you?

Mr. Ashe’s activism definitely made his story more interesting to me. It’s one thing to be good in one field, but to reach outside that area of comfort to something totally different is amazing. Sports gave Mr. Ashe the platform to try to make the world a better place through the causes for which he chose to speak and he picked Apartheid and AIDS, two really tough ones.

Do you play tennis? What other sports do you enjoy?

I play tennis and basketball. I’ve played softball in the past and I’d like to give football a try.

This is your third published picture book. What have you learned since your first book, Catching the Moon, was published? What advice do you have for aspiring authors?

Since Catching the Moon was published, I've learned that young readers are starved for books about people with whom they can identify. I was surprised to find so many young boys who identify with Marcenia Lyle, the heroine of Catching the Moon. I've gotten letters from youngsters who cite Marcenia as their inspiration for trying out for school teams. When a child writes to me and says, "If Marcenia can do it, I can too!" then I've done what I set out to do.

My advice to aspiring writers is the same advice that Jon Sciezscka, author of The Stinky Cheese Man and Other Fairly Stupid Tales, gave me in 1996: write a story that you believe in. To that, I'd add mind your grammar and spelling. Don't just want to be a writer. Learn how to write well, as well.

In Game, Set, Match, Champion Arthur Ashe you bring to light the issues Arthur Ashe had with overconfidence and hubris. Do you think this is something that a lot of young athletes need to deal with? 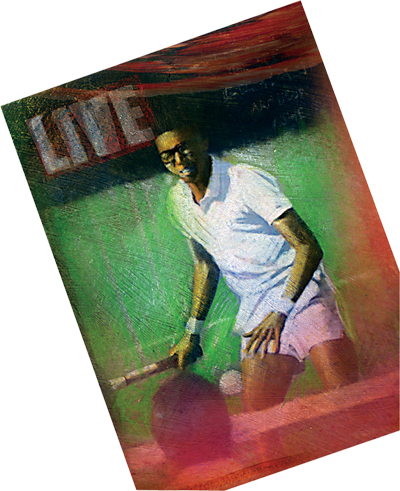 I edit for In The Game Magazine, a high school sports journal based in Georgia, where sports are extremely popular. Like the very young Arthur Ashe, talented young athletes do tend to suffer from overconfidence and hubris from time to time. And as with Mr. Ashe, good coaching and maturity nips that in the bud. The best young athletes I’ve met exemplify the equal importance of good gamesmanship and athleticism. The two seem to combine for a quiet confidence that is unbeatable in competition.

The major difference between writing about sports for a newspaper and writing about sports for a book is that with a book, I get to choose my subject and the focus I’ll take. With a newspaper, unless you’re a columnist, your subject is assigned. In a book, I can delve deeper into a subject’s life or an event from his or her life. In journalism, you’re expected to stick to a presentation of the facts. I can imagine dialogue in a book, whereas in a newspaper article, you must always print your subject’s words exactly. I can use actual quotes in a book, too, but sometimes, quotes aren’t available.

Are there any athletes today that you admire?

I admire quite a few of today’s athletes. Michael Phelps is one of my favorites. He’s probably the best swimmer the world has ever seen, but he’s also a young man who’s had to grow up on a world stage. He’s done some stupid things, but he hasn’t repeated them. He’s all too human with a superhuman ability, which intrigues me. I adore Dara Torres, who at 41 competed in her fifth Olympic Games, medaling in each one. She won two silver medals in the 2008 Beijing games, two years after having her daughter! I’m a nut for Jean Driscoll, who won the Boston Marathon’s women’s wheelchair event eight times. Snowboarder/skateboarder Shaun White is one of my absolute favorites. When he won the 2010 gold medal in the halfpipe, I was so excited, I wanted to fly to Vancouver and slap him a high-five!

How did you decide which games to describe in detail in Game, Set, Match, Champion Arthur Ashe?

Mr. Ashe’s 1975 Wimbledon win was so significant because he became the first African American man to win the most prestigious prize in tennis, so there was no question I’d describe that game. I remember watching that match on television, with my sisters crowded around me. I also had to include the match where Ron Charity, Arthur’s first coach, taught him the importance of humility, because that was a lesson Arthur Ashe learned very well and carried throughout his life.

Did you watch the U.S. Open this year? Who were you rooting for?

I watch the U.S. Open every year. I love watching Venus and Serena Williams play. They’ve competed so well for so long, while never once giving the impression that tennis is the most important thing in the world to them. They have lives outside tennis, and even though they take a lot of heat for venturing from tennis from time to time, I like that about them. The first time I saw them play live was in 1993 at the Baltimore Arena. They were 13 and 12, and beads a-clackin’, they slaughtered Billy and Cal Ripken Jr. of the Baltimore Orioles in an exhibition match. I was disappointed that Serena didn't play this year because of an injury.

On the men’s side, I was hoping Roger Federer would go all the way. I like Rafael Nadal, but Federer makes history with each Grand Slam title he earns.

What could today’s professional tennis players learn from Arthur Ashe?

Tennis players aren’t the only athletes who could learn from Arthur Ashe. As a mere spectator, there are moments when I want to jump up and scream and cuss and act like a wild animal over a play, and since I’m in my living room, I can. But athletes on the field of play should adhere to a higher standard. You can be passionate about your performance and the game without throwing a nutty—screaming profanities, throwing equipment, yelling at fans—when something doesn’t go your way. Personally, I watch games to see the clashing of titans, not to see grown men, and in the rare case, women, behave like they don’t have good sense. Arthur Ashe proved that calm and focus under pressure are great weapons to have in competition.

What do you want young readers to take away from Game, Set, Match, Champion Arthur Ashe?

I’d like young readers to remember a man who was a fine athlete as well as an outstanding citizen of the world. I want them to know that you don’t have to be stacked with muscle or tall or have perfect eyesight to be a good athlete, and that you don’t have to raise your voice to be heard, or behave outrageously to be noticed. If there's a lesson in Game, Set, Match, Champion Arthur Ashe, it's that an ordinary person can change the world.