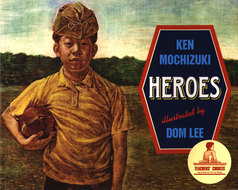 Synopsis
Donnie is tired of playing the bad guy every time he and his friends get together to play war. According to the other kids, Donnie should play the enemy: after all, as a Japanese American, he looks like "them."

When he argues that his family served in the U.S. Army, Donnie's friends dare him to prove it. But when he asks his father and uncle for proof, they tell him that kids should play something besides war. "Real heroes don't brag," Uncle Yosh says. "They just do what they are supposed to do."

Set against the backdrop of the 1960s, and a new conflict in Vietnam, this story explores how one family deals with the painful legacy of war. In their powerful follow-up to Baseball Saved Us, Ken Mochizuki and Dom Lee once again present readers with American heroes they won't usually find in history books, but who they can always hold in their hearts.

In 1943, young Japanese American men volunteered to serve in the U.S. armed forces, though they and their families were imprisoned in American concentration camps. They were in these camps because they were not considered Americans, many of these young men reasoned, and fighting for their country would prove they were as American as anyone else. About 20,000 volunteered from the camps. Some became members of the Military Intelligence Service, in which they served as interpreters and interrogators for U.S. forces in the Pacific. But many were sent to and trained at Camp Shelby in Hattiesburg, Mississippi. Since the U.S. Army was still segregated, they became the all-Japanese American 442nd.

In 1944, the 442nd was sent to Italy, where they joined the 100th Battalion, a unit composed entirely of Japanese Americans from Hawaii. They fought some of the toughest battles against the Germans in Italy, and are most remembered for rescuing the "Lost Battalion," a U.S. Army unit from Texas trapped by the Germans in the mountains of northeastern France. During that mission, the 442nd suffered 1,400 casualties to rescue 270 of the "Lost Battalion."

The 442nd received 18,143 individual decorations, including one Congressional Medal of Honor, and seven Presidential Unit Citations, making it one of the most highly decorated units in U.S. Army history.

Before Reading
Prereading Focus Discussion and Questions
Before students read the story, you might want them to discuss one of the following questions as a motivation for reading.

BEFORE READING
Prereading Focus Questions
Before students read the story, you might want them to discuss one of the following questions as a motivation for reading.

AFTER READING
Discussion Questions
After reading, discuss the story. Some questions that can be used to generate discussion are:

Reader’s Response Journal
To promote active reading, you might want students to keep a reader's response journal as they read the story. This journal will help students personalize what they are reading.

Calculate the amount of time that various wars lasted as well as the interim time between wars. What war lasted the longest? The shortest? As a result of wars, there are many casualties. Having gathered the appropriate information, compare population sizes before and after wars. War also causes much damage and are costly. Build a bar graph of approximated damage costs per country per war as well as of other war expenses, such as weapons.

Observe monuments and paintings depicting or commemorating wars or war heroes, e.g., the Vietnam Memorial. Are there any war memorials located in your area?

About the Author and Illustrator

Ken Mochizuki is a native of Seattle, WA, where he currently lives. Having received his bachelor's degree in communications from the University of Washington, he went on to spend five years as a professional actor in Los Angeles. For the past ten years, he has worked as a newspaper journalist, with a special interest in the history and current issues of Americans of Japanese and Pacific Islander descent.

Heroes is his second picture book after the award-winning Baseball Saved Us, which is about a Japanese American boy who discovers hope and self-respect at an internment camp during World War II. Unlike Donnie, Mochizuki admitted that he never had to play the "bad guy." He dedicates Heroes to those above-mentioned people who "served in the U.S. armed forces and defended America with little or no recognition."

Dom Lee was born in Seoul, South Korea and now lives in New Jersey with his wife and their two children. He received his bachelor's degree in fine arts from Seoul National University and his master's degree from the School of Visual Arts in New York City.

Heroes is Lee's second picture book. As in his first picture book, Baseball Saved Us, the illustrations for Heroes were rendered by applying encaustic beeswax on paper, then scratching out images, and finally adding paint and colored pencil for color.

Mochizuki and Lee teamed up again for their third book, the award-winning Passage To Freedom: The Sugihara Story, which tells the true story of Chiune Sugihara, the “Japanese Schindler,” who, with his family’s encouragement, saved thousands of Jews in Lithuania during World War II. Also to Dom Lee’s credit is Journey Home, which he illustrated with his wife, Keunhee Lee.