By Lynne Barasch
Illustrations by

Hiromi Suzuki missed spending time with her father, a sushi chef who worked long hours in the family’s Japanese restaurant in New York City. So one day when she was eight years old, Hiromi begged her father to take her along to the Fulton Fish Market, where he bought fresh fish. Hiromi was fascinated by what she saw and learned; by the time she was thirteen, she was ready to take the next step. She asked her father to teach her to make sushi. Little did Hiromi realize that her request would lead her to the forefront of a minor culinary revolution, as women claimed their place in the once all-male world of sushi chefs. In this booktalk, author Lynne Barasch talks about how she met Hiromi and decided to tell her story.

You’ve known Hiromi Suzuki since she was a child. What was she like 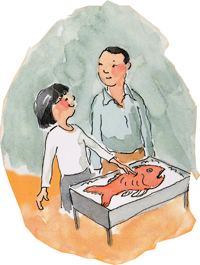 I first met Hiromi as an adorable, shy, five-year-old kindergartener in my daughter Dinah’s class. Hiromi and Dinah became friends immediately. Their teacher predicted that they would be lifelong friends, and her prediction came true!

Where is Hiromi Suzuki now?

Hiromi is on her way to Japan to work as a chef there for six months. Hiromi thinks this will be a good experience for her. Previously she worked at her father’s restaurant, completed a course at a culinary institute, and then worked at KAI restaurant in New York City.

Have you always been a fan of sushi? If so, what kinds are your favorite?

I have learned to like sushi through the guidance of my daughters and Hiromi. My current favorite is salmon roe sushi, but I also love sashimi of all kinds.

What kind of references did you use for the illustrations for this book? Did Hiromi help in terms of getting the sushi and fish to look accurate?

Many of the illustrations were researched online. I found photos of the old Fulton Fish Market easily. Other photos for reference were from Japan. Hiromi was able to give me many of these. Also, Hiromi looked carefully at the Japanese characters in my illustrations to see if I had inadvertently written words in Japanese that would not be correct or appropriate.

Why is it important to tell Hiromi’s story?

Hiromi’s story reflects the warmth of family that is important to all children. It also shows how dreams can be realized by even the youngest child. It only takes perserverance and purpose.

Have you had a chance to share the book with children yet? If so, what was their reaction?

I read this book to my grandchildren, who loved it. My four-year-old great-nephew, who lives in Brooklyn, was delighted to see the Brooklyn Bridge, the Staten Island Ferry, and Manhattan on the opposite shore. In the coming months, I plan to share Hiromi’s story with many more people of all ages.

I hope children will take away the knowledge that they can achieve their dreams and that they can start when they are very young, as Hiromi did. And sometimes Mom and Dad can help! I also hope readers will come away with a heightened sense of cultural diversity.

Lynne Barasch lives in New York City with her husband.